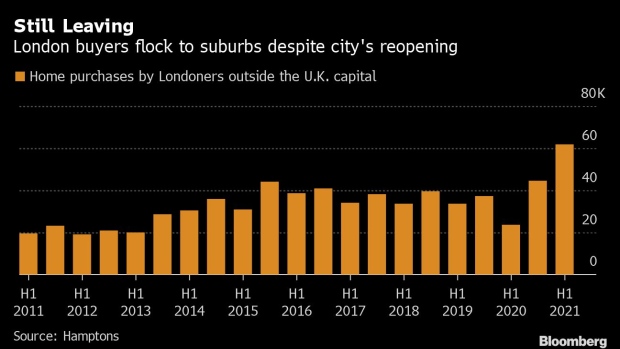 Coloured houses in the Chelsea area of London, U.K., on Friday, May 21, 2021. After a year of shunning the capital amid lockdowns and coronavirus, many renters are now looking to return to urban life as restrictions ease, according to data from estate agent Hamptons International. Photographer: Chris Ratcliffe/Bloomberg , Bloomberg

(Bloomberg) -- Record swathes of London home buyers are fleeing for the suburbs, even as the capital reopens and attempts to shrug off the pandemic.

The city’s residents snapped up more than 60,000 homes elsewhere in the U.K. in the first six months of this year, according to Hamptons, the most since the broker started tracking the data 15 years ago. Deals by Londoners accounted for 8.6% of all purchases outside the capital, even higher than the share last year when the Covid-driven wave of outward migration began.

“Pandemic-fueled city outmigration shows no sign of slowing,” said Hamptons Head of Research Aneisha Beveridge. “Despite lockdowns easing and offices and restaurants reopening, Londoners have continued to reevaluate where they want to live, with many bringing future-planned moves forward.”

The average distance from London of homes bought by former residents was 34.6 miles (55.7 kilometers), also the longest since Hamptons’ records began. Top destinations include Tandridge in Surrey to the city’s south and the Three Rivers and Hertsmere districts in Hertfordshire on the northern border.