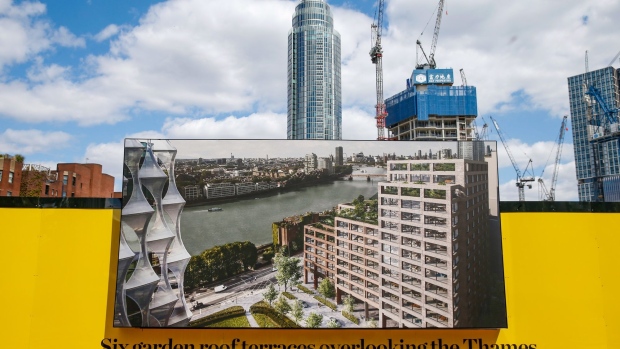 Cranes stand on a construction site beyond an advertising hoarding for the Embassy Gardens residential development in the Nine Elms district in London, U.K., on Tuesday, May 12, 2020. The pandemic has crushed hopes of a recovery in Londons housing market after years of sustained declines. Photographer: Hollie Adams/Bloomberg , Bloomberg

(Bloomberg) -- Rents in London’s wealthiest districts are slumping as owners choose to lease their properties rather than sell into a sliding market.

Prices fell 4.6% on an annual basis in June, according to Knight Frank’s prime central London index, the biggest drop in more than three years. A number of large central London properties were listed for rent as lockdown restrictions were lifted, increasing supply further, the agent said.

“Throughout April and May of this year the number of instructions to let was consistently ahead of the same period last year as owners hedged their bets during the pandemic and opted to let,” said Tom Bill, head of U.K. residential research at Knight Frank. “Logistical and financial constraints around corporate relocations has also had a dampening effect on demand and created a tenant’s market.”

As the U.K. gradually lifts further lockdown rules, the window of opportunity for tenants may be short-lived. In the week ending June 27, the number of valuation appraisals for prospective landlords was almost a quarter below the five-year average, according to Knight Frank.

The rate of decline in sale prices is also slowing in prime London markets. Values were down 3.6% in the three months to June, compared with a 4.4% drop in the same period through May.