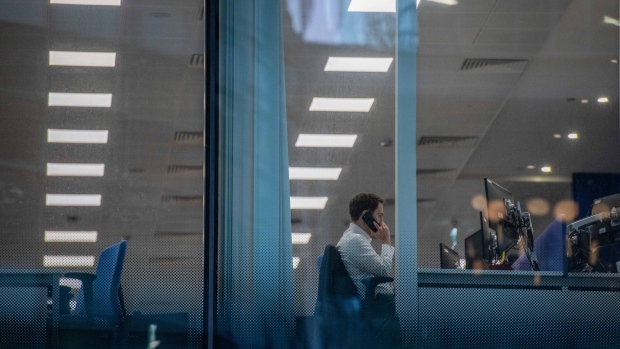 An office worker at his desk in the City of London, U.K., on Thursday, Sept. 30, 2021. Officials have flagged concerns about the labor market after the end of the government’s furlough plan, while households are also facing looming increases in their tax and energy bills that economists say could hurt confidence and reduce the opportunity for hikes. Photographer: Chris J. Ratcliffe/Bloomberg , Bloomberg

(Bloomberg) -- Offices are starting to fill up again, but it’s still not where Londoners are spending their entire work week.

More than 80% of London-based office employees who participated in a JPMorgan Chase & Co. survey said working full time either from home or from the office were their least preferred options after the ending of pandemic restrictions, analysts led by Neil Green wrote in a note.

The analysts polled about 650 workers between Sept. 30 and Oct. 12, with about two-thirds of respondents saying they were back in the office on a regular basis. Only 37% said they had been going in five days.

“This data strongly supports the trend for flexible offices,” the analysts wrote. “Employee demands are evolving.”

Workspace Group Plc, which owns offices in London that are let out on a flexible basis, is the “purest play” on the trend toward flexible offices, according to the JPMorgan analysts.

READ: City of London’s Bankers Are Finally Getting Back to Their Desks