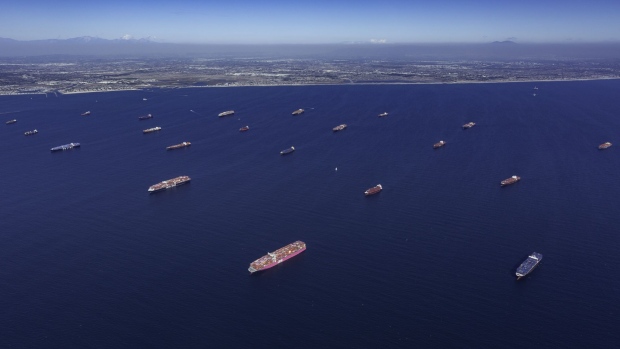 Container ships moored off the Los Angeles and Long Beach ports in Long Beach, California, U.S., on Saturday, Oct. 9, 2021. An unremitting shipping logjam in the waters outside of Los Angeles has already contributed to higher costs, delays and intermittent goods shortages across the U.S. Now, it could be to blame for California's biggest oil spill in 27 years. , Bloomberg

(Bloomberg) -- Port authorities in California and Utah have partnered with Union Pacific Corp. to move more cargo by rail, a step toward alleviating record supply-chain logjams plaguing the U.S.’s biggest maritime hubs on the West Coast.

The direct rail service connecting the port of Long Beach to Salt Lake City will allow cargo destined for all of the so-called intermountain west region to be taken from the clogged terminals on the coast for further inland distribution, the parties said in a joint statement Wednesday. Currently, only 10% of the cargo in the region moves by rail, they said. Loading 100 intermodal rail cars equates to 300 trucks off the road.

“Much of this cargo traditionally moves to Utah, Colorado, Nevada, and Idaho by truck and thus must be removed from the port terminals one container at a time,” they said. “Reengaging this direct rail service will allow removal of blocks of containers at a time.”

Seventy-four ships are anchored off the West Coast ports of Los Angeles and Long Beach as of Wednesday, prevented from unloading until space for their containers is freed up on the docks, Port of Long Beach Executive Director Mario Cordero said on a call with reporters.

Bottlenecks throughout manufacturing, transport, retail and labor have deteriorated to the point that the Biden administration has set up a task force to smooth them out as the holiday shopping season looms.