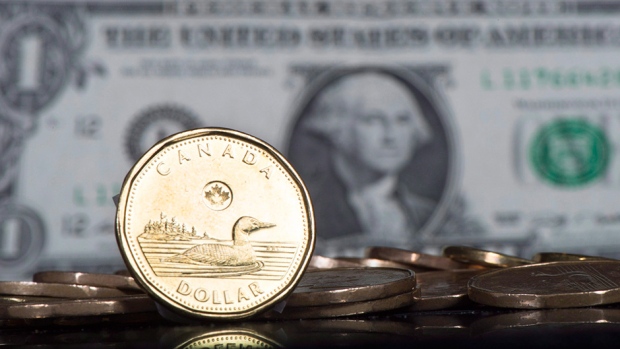 Speculation that the Canadian dollar could rally if the U.S. Federal Reserve cuts interest rates this summer has been gaining momentum, but one economist says the loonie is not at risk of “rocketing” anytime soon.

Douglas Porter, chief economist at BMO Capital Markets, revised his outlook for the U.S. central bank last week, and is now expecting the first of two rate cuts by the Fed this year to happen as early as next month. But, he said that doesn’t mean the Bank of Canada will have “little choice” but to follow suit.

“Some have suggested that the loonie could rocket if the Bank [of Canada] doesn’t ape the Fed’s moves, but that ignores the fact that markets have 50 basis points more easing from the Fed priced in than for the Bank of Canada this year,” Porter wrote in a note to clients Friday.

“And, that’s not even dealing with the obvious issue here — does anyone truly believe that the loonie is at risk of ‘rocketing’ anytime soon, especially with oil prices retreating and Canada’s massive competitiveness challenges?”

The Canadian dollar is up less than two per cent this year against U.S. dollar as it has struggled to make significant gains. Benchmark U.S. oil – West Texas Intermediate –  has fallen more than 21 per cent since hitting a peak in April, and the loonie has lost 0.5 per cent since then.

Porter added that the loonie is no longer the “big talking point” for monetary policy like it was in the first few years of Governor Stephen Poloz’s term.

“Perhaps … [this] is due to more stability and an already weak currency, or just fatigue on that particular subject,” Porter wrote.

Despite less focus on the currency, the loonie could return as a policy driver if it moves towards 80 cents US, said Porter. That’s a more than seven-per-cent increase from its current level of 74 cents US.

“A stronger Canadian dollar would further worsen Canada’s competitiveness, restraining exports,” Porter said. “The speed and extent of any appreciation would be a factor, but it’s hard to believe the Bank of Canada would overlook meaningful currency strength.”

However, Porter still expects the Bank of Canada to leave interest rates unchanged through to 2020, unless the Fed is more aggressive, and delivers a third rate cut this year.