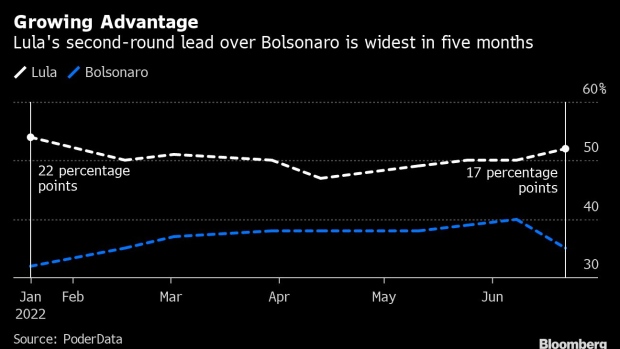 (Bloomberg) -- Former President Luiz Inacio Lula da Silva saw his lead over incumbent Jair Bolsonaro grow to 17 percentage points in a possible second round, the widest in five months, according to a new poll carried out after the latest fuel price increase in Brazil.

Lula would receive 52% of the votes while Bolsonaro would get 35% in a runoff vote, according to a PoderData survey conducted between June 19-21, just days after Petroleo Brasileiro SA announced another increase in gasoline and diesel prices. Less than four months before elections, voters largely blame the president for costlier fuel and soaring inflation.

Petrobras’s decision angered Bolsonaro and his allies in congress, who have since stepped up criticism of the state-controlled oil producer, forcing an early resignation of his chief executive -- already the third in the current administration. Lawmakers are debating a series of measures to cushion the blow of higher fuel prices, including tax cuts and diesel vouchers for truck drivers.

Recent polls suggest that Bolsonaro’s strategy of blaming soaring prices on Petrobras has done little to boost his popularity. On Wednesday the president said the oil giant could delay fuel adjustments for some time, even if it continues tracking international oil prices. At the moment, he told a local radio station, the company is “making unimaginable profits.”

For the first round of the election, PoderData shows Lula receiving 44% of the votes and Bolsonaro 34% -- that compares with 43% and 35%, respectively, in the previous survey carried out June 5-7. Brazilians will go to the polls on Oct. 2 and, if no presidential candidate receives more than 50% of valid votes then, will return for a runnoff election on Oct. 30.

PoderData interviewed 3,000 people over the phone in 302 municipalities across Brazil. The poll has a margin of error of plus or minus 2 percentage points.