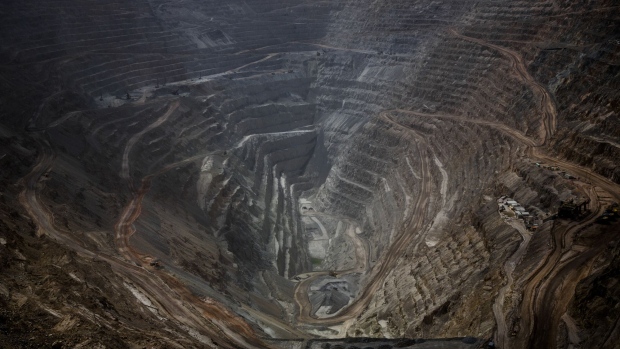 (Bloomberg) -- Machines are taking over a giant Chilean copper mine, replacing about a third of the workforce as owner Codelco struggles to keep its title as the world’s largest producer of the metal.

Codelco officially inaugurated underground operations at its century-old Chuquicamata mine on Wednesday. The $5.5 billion project is the first of the state company’s multi-billion dollar effort to upgrade mining activities in order to boost productivity. The miner’s output fell to 1.68 million tons last year, from 1.73 million a year earlier as its higher-grade ore reserves decline.

About 1,700 jobs will be cut at the Chuquicamata project as operations shift to underground mining, from open pit. The switch is necessary as the state-run company aims to access higher grade ore through tunnels underneath the pit to avoid a production slump in the coming years.

“Reforms have never been painless, but we must do them,” Codelco Chief Executive Officer Nelson Pizarro said in a speech during the inauguration. “Digital transformation is our ally, the only thing that can help us satisfy environmental requirements, lower costs and empathize with communities.”

The underground mine will use conveyor belts to transport the mineral. It will need fewer truck drivers, and workers with different skills. The open pit will be shut at the end of 2020.

Workers won’t go without a fight. In July, about 3,200 Chuquicamata machine operators and maintenance workers staged a 14-day strike. Unions demanded to have a bigger say in the transition underground and retirement benefits for the people who won’t be employed in the new mine. The agreement reached at the end of the labor dispute included guarantees that Codelco will provide health coverage for miners after they retire.

Chuquicamata underground is a mine that will use the block-caving method to extract the mineral. Also implemented by Freeport-McMoRan Inc. at its Grasberg mine in Indonesia, it’s more efficient and cheaper than traditional underground mining. The method will reduce fuel consumption by 80% and automation will increase workers’ productivity by 40%.

“Mining will be a great business only for those willing to change,” Pizarro said. “After 104 years of uninterrupted activity, the world’s largest open pit mine is transformed today into one of the most modern underground mines in the world.”