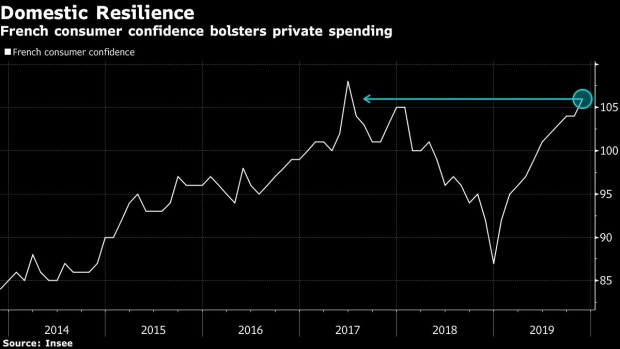 In what has been the undoing of previous French governments, unions representing everyone from transport workers to lawyers, doctors, teachers and students are going on an indefinite “greve,” or strike, starting Thursday. The strike will disrupt rail transport, flights, schools and hospitals across France.

Threatening to bring the country to a standstill until the government backs down, the unions are opposing Macron’s plan for a top-to-bottom rebuilding of the pension system. While Macron has already barreled through reforms of tax and labor laws, history shows pensions won’t be nearly as easy. In 1995, Prime Minister Alain Juppe abandoned his pension-reform plan after strikes paralyzed the country for about a month.

“We have one of the best pension systems in the world, if not the best,” the far-left CGT union said on its newsletter site. “Yet the president has decided, purely out of ideology, to wipe it out.”

Coming just a year after the start of the Yellow Vest movement that drew violent protests over several Saturdays in Paris and other major French cities, the strike risks turning into one of the biggest challenges of Macron’s term. It’s also become a catch-all for the country’s discontent, with demands for everything from higher wages and lower gasoline prices to more environmentally friendly policies.

Macron, who announced 17 billion euros ($18.9 billion) of tax breaks to appease the Yellow Vest protesters, faces municipal elections in the spring -- crucial to cementing his fledgling political party before the legislative and presidential votes in 2022.

Macron’s plan is to abolish a pension system with 42 different benefit regimes for different classes of workers and replace it with a universal points-based system. In the 21st century, he argues, workers don’t have linear careers, as was assumed in 1945 when France’s pension system was conceived. The multitude of regimes has become “corporatist,” leading to injustice, complexity and failures, the government says.

Most French unions disagree. They say Macron’s overhaul would shrink pensions, push back the retirement age and reduce solidarity between workers.

The government says it will be necessary for French people to work longer to stop the system racking up more deficits. But it says it won’t cut pensions or significantly increase contributions paid by workers.

To defuse tensions, the government will continue consultations through to Dec. 9 or 10. The negotiations will focus in particular on finding a way to smoothly transition to the new universal system, without delaying it by decades.

“The idea is to introduce reform on pensions that is fair and that is necessary for all French people,” Finance Minister Bruno Le Maire said in Brussels on Wednesday. “Of course, there remains a margin of maneuver and a margin of negotiation for this project, but the necessity of having a very important reform of the pension system, I think everyone is aware of the necessity of moving on that question.”

The government is still working on its final plan, and a bill is to be presented to lawmakers by the summer next year. Still, Prime Minister Edouard Philippe warned that the government is determined and won’t back down.

While the impact on the economy of a one-day strike would be marginal, if it lasts, consumer spending -- the main driver of growth -- could be dented, according to Ostrum AM’s Chief Economist Philippe Waechter.

In 1995, trade helped offset the impact of a month of protests, but in the current global environment of a tariff war and geopolitical uncertainties, that’s unlikely, Waechter said.

On the other hand, in contrast with 1995, when households’ sentiment on the future was negative, French consumers are now more optimistic and might think twice before supporting a long-drawn strike, Waechter said.

To contact the editors responsible for this story: Geraldine Amiel at gamiel@bloomberg.net, Vidya Root