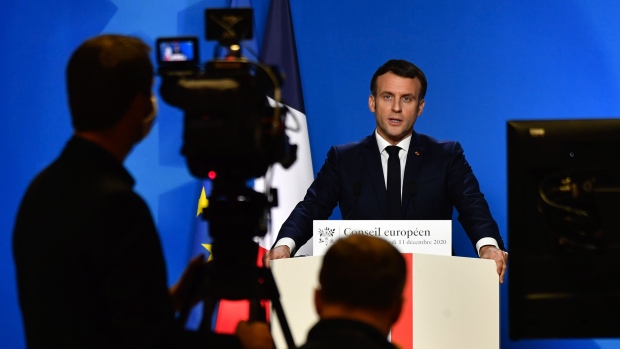 (Bloomberg) -- French President Emmanuel Macron warned some of the tech industry’s biggest players they need to get on board with European Union efforts to moderate online content and constrain their market power.

During a call with Microsoft Corp. CEO Satya Nadella and Sundar Pichai of Alphabet Inc. on Monday, Macron told the executives any unfair practices will be seen as an attack on European democracy, according to an account of the conversation from one of the president’s aides. Spokespeople for the companies in Paris did not immediately respond to emails seeking comment.

France has been a key mover in shaping EU efforts to prevent the spread of hate speech and disinformation online and at curbing the power of tech giants. The European Commission in December proposed two sets of rules, the Digital Services Act and the Digital Markets Act, which are being reviewed by the European Parliament and the member states before they become law.

Under the Digital Services Act, very large platforms like Microsoft and Google could face fines as high as 6% of global revenue if they don’t comply with orders to remove illegal content. They will need to carry out assessments identifying systemic risks, including how their services may be manipulated by inauthentic accounts and could impact elections. The Digital Markets Act will ban powerful companies deemed “gatekeepers” from favoring their own products or else face billion-dollar fines. In extreme cases, they could even be ordered to break up their European businesses.

“We need to contain this immense power of the big digital companies,” European Commission President Ursula von der Leyen said in a virtual address at the World Economic Forum on Tuesday. “We want the platforms to be transparent about how their algorithms work because we cannot accept that decisions that have a far-reaching impact on our democracy are taken by computer programs alone.”

EU officials have rallied around the bloc’s plans to curb hate speech and disinformation in recent weeks following the attacks on the U.S. Congress. Facebook Inc., Twitter Inc. and Snap Inc. banned the accounts of former U.S. President Donald Trump for posts they said encouraged the violent rioters who stormed the Capitol building and spread false information about the country’s November election.

European leaders including German Chancellor Angela Merkel have warned of the dangers of letting private companies take such decisions and insisted on the need for regulation, particularly on matters of speech.

French lawmakers are working on provisions that would implement the DSA regime in France before it enters into force at EU-level. The provisions are likely to be added to Macron’s flagship law on “separatism” and “republican principles” which is under review at the National Assembly. The bill was presented after the gruesome killing of a teacher, Samuel Paty, by a Jihadist after he had been criticized in a video online.

The French Constitutional Court has previously struck down a government-backed provision to fight hate speech that would have forced platforms to remove obviously illegal content within 24 hours of being notified.

Macron also set out his red lines on cloud computing in his call with the two executives, the aide said. Microsoft and Google have both joined consortia with European partners that aim to provide cloud-computing services to clients in the EU. Macron told them that he could only accept the involvement of companies from outside the EU if they were fully compliant with European law and data protection issues, the aide said.