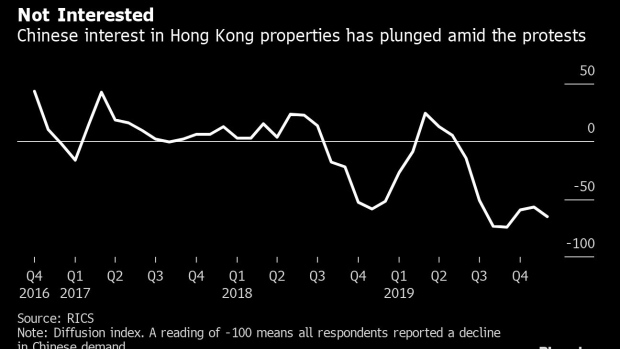 Residential buildings stand in Hong Kong, China, on Saturday, May 11, 2019. The U.S. Federal Reserve is poised to cut rates on July 31 for the first time since 2008, amid a global slowdown. Because Hong Kong's currency is pegged to the dollar, the Asian financial hub will face the risk that low borrowing costs keep inflating what is already the world’s most expensive property market. Photographer: Justin Chin/Bloomberg , Bloomberg

(Bloomberg) -- Mainland Chinese, once the driving force behind Hong Kong’s stratospheric home prices, are now shunning the city after months of protests.

Inquiries for Hong Kong properties from mainland Chinese plunged through the second half of last year, according to Royal Institution of Chartered Surveyors data that tracks the percentage of agents reporting a drop in interest versus those reporting an increase.

“Whereas a year ago they were enthusiastic, mainland buyers today are cautious or downright skeptical,” said Georg Chmiel, executive chairman of Juwai IQI, an online platform that specializes in Chinese buyers looking for international properties. “Either they are postponing their purchase in Hong Kong or deciding against it altogether.”

The often-violent demonstrations have also deterred tourists from mainland China. The number of visitor arrivals from the mainland, Hong Kong’s key source of tourists, slumped 58% in November from a year earlier, according to government data.

Hong Kong retained its title of the world’s least-affordable housing market for a 10th straight year in 2019, according to a Demographia report earlier this week.

Chinese demand had long been seen as a catalyst for surging home prices before the Hong Kong government increased stamp duties for foreign buyers in 2016. Demand from across the border has since dwindled but remains an important factor supporting the city’s real estate market.

To contact the reporter on this story: Shawna Kwan in Hong Kong at wkwan35@bloomberg.net