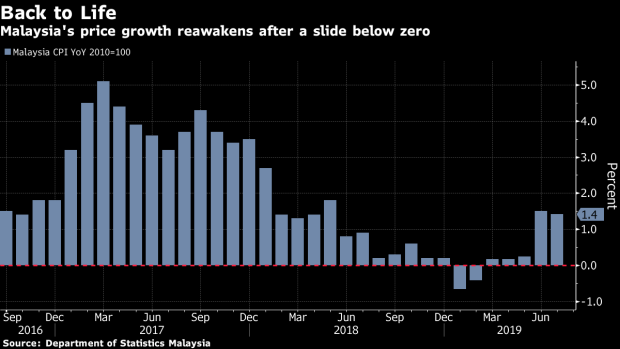 A motorcyclist rides past the Bank Negara Malaysia headquarters in Kuala Lumpur, Malaysia, on Wednesday, June 19, 2019. Malaysia’s central bank is strengthening safeguards to avoid a repeat of the 1MDB scandal, Governor Nor Shamsiah Mohd Yunus said in an interview. Photographer: Nadirah Zakariya/Bloomberg , Bloomberg

Of the 24 economists in a Bloomberg survey, 16 are forecasting the benchmark interest rate will stay at 3%, while eight project a 25 basis-point cut. Swap markets are showing increasing expectations of rate cuts too.

Bank Negara Malaysia was one of the first central banks in Asia this year to cut interest rates, easing by 25 basis points in May and holding pat since then. That pre-emptive move and fairly resilient growth this year may give policy makers scope to hold for now, even as more central banks issue dovish surprises with bigger-than-expected rate cuts.

“Despite pockets of weakness, the Malaysian economy is holding up well,” said Joseph Incalcaterra, chief economist for Southeast Asia at HSBC Holdings Plc in Hong Kong. “We see little urgency for immediate easing, and can already see the impact of May’s 25 basis-point rate cut starting to impact loan activity.”

Here are a few critical things to watch in Thursday’s decision:

Price pressures awakened from a lull in June and July, gaining at a 1.4% year-on-year pace. While Malaysia doesn’t have a target band for inflation, the figures are in line with the goals of most central banks in keeping low and stable prices.

Inflation might still be benign enough to push Bank Negara to cut sooner than later, according to Prakash Sakpal, an economist at ING Groep NV in Singapore.

“With the lowest inflation rate in Asia, Malaysia’s real (policy) interest rate is among the highest in the region,” Sakpal wrote in a research note. “This is not good for investment demand, which has, in fact, contributed negatively to the country’s GDP growth in the first half of the year.”

Bucking the regional and global trend, Malaysia’s economic growth picked up in the second quarter on the back of solid domestic demand. Gross domestic product grew 4.9% from a year earlier for the strongest expansion since early 2018 and surprising economists that had looked for a 4.7% gain.

The release was a stark contrast to neighbors that week, with Singapore slashing its full-year growth forecast to almost zero and Indonesia and Thailand among a batch of regional economies announcing fiscal stimulus packages. Governor Nor Shamsiah Mohd Yunus said after the report that Bank Negara still sees full-year GDP growth at 4.3%-4.8%.

As a rare net energy exporter in the region, Malaysia roots for a rebound in commodity prices that have been battered by flailing global demand. As geopolitical tensions rise in oil-sensitive areas, including around Iran, agreements to cut supply could be a boon for crude prices -- and economies like Malaysia’s.

Key members from the Organization of Petroleum Exporting Countries and its allies are set to meet in Abu Dhabi Thursday to discuss potential output cuts.

Beyond oil, Malaysia is pressured by the same factors haunting central banks across Asia: the threat of outflows as investors flee to a safe-haven greenback, and heightened trade tensions that are disrupting supply chains and damping investment.

The trade war isn’t all bad news for Malaysia though. Governor Shamsiah said in a June interview that the diversion in trade and investment from China to places like Malaysia could add 10 basis points to this year’s growth rate.

--With assistance from Marcus Wong.

To contact the editors responsible for this story: Nasreen Seria at nseria@bloomberg.net, Yudith Ho