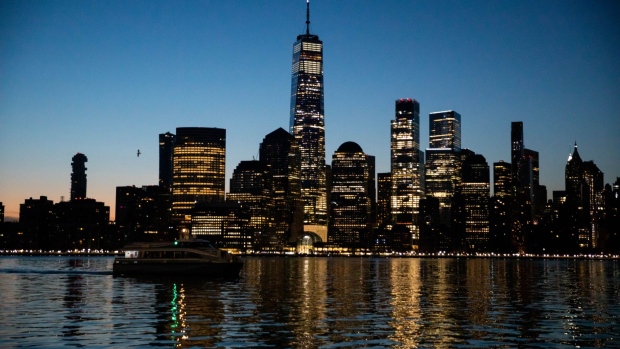 (Bloomberg) -- A year after the pandemic emptied out Manhattan, the office market has yet to reach rock bottom.

Even as companies look to bring workers back, the amount of office space available in the borough is at its highest level in at least 30 years. And rents have fallen for five straight quarters, according to the commercial brokerage Savills. As many tenants continue to re-evaluate their needs for physical offices, the pressures on the market will stretch at least into next year.

“We will not hit the bottom in 2021,” said Peter Riguardi, chairman and president of the New York tri-state region at Jones Lang LaSalle Inc. “The only way we hit the bottom is when we start noticing there are transactions occurring that are creating positive absorption. We are not seeing that yet.”

With more and more New Yorkers getting vaccinated, major companies are eyeing a return to the office in coming months. JPMorgan Chase & Co. and Goldman Sachs Group Inc. aim to have hundreds of interns report in person this summer, and a survey by the Partnership for New York City shows nearly half of Manhattan’s office workers are expected back by September. Still, it won’t be enough to stop the bleeding.

With remote working still part of the plan for many companies, much of the newly available space is a result of tenants putting their own surplus offices on the market. The amount of space listed for sublease reached 22 million square feet (2 million square meters) in the first quarter, 62% more than before the pandemic, Savills data show.

Banks such as JPMorgan and First Republic Bank have recently listed blocks of space in the Financial District and Hudson Yards, according to Savills. Carlyle Group Inc. is seeking to sublease offices at 299 Park Ave. as it looks to consolidate workers at nearby One Vanderbilt, people familiar with the plans said.

While office prices are still on the decline, landlord concessions including free rent and tenant improvement allowances have surged, a trend that’s likely to continue for the next 12 to 18 months, according to Savills.

Deep discounts are drawing some companies back to the market in search of new space, but not many deals have materialized yet. A few firms, including Blackstone Group Inc., have expanded in Manhattan, but many others are expected to scale back their real estate.

“There is still more supply hitting the market than demand and leasing,” said Jim Wenk, a vice chairman at Savills. “Any company that needs or wants to downsize their physical footprint as a result of either hybrid working or business consolidation will likely make those business decisions over the next two quarters.”

Meanwhile, New Yorkers are coming back to live in Manhattan, pouncing on bargain rents and record incentives after time spent away to ride out the pandemic while working remotely. Having more people return to the city -- on a bet that businesses will reopen and cultural attractions will spring to life -- also bodes well for an office-market recovery.