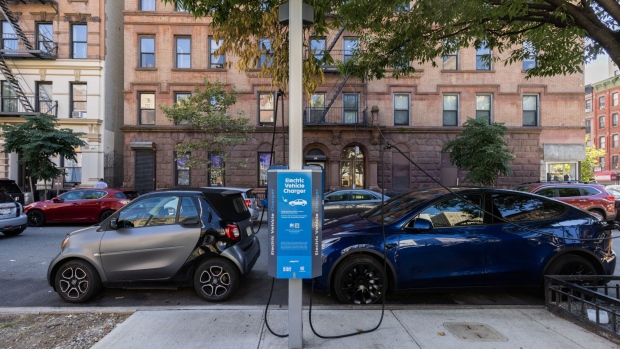 (Bloomberg) -- Charging an electric car in Manhattan takes a little work — but it’s already much easier than finding a gas station.

The borough has about 320 publicly accessible charging locations, according to data from the US Department of Energy, compared with just 29 remaining gas stations, according to the New York State Department of Agriculture and Markets. In other words, Manhattan’s EV-charging sites now outnumber its gas stations more than 10 to one. Gas stations still dominate citywide — 697 across all five boroughs, versus about 520 charging sites — but there, too, the chargers are catching up.

The most immediate reason for Manhattan’s gas-station scarcity has nothing to do with EVs. Land on the island is simply too valuable to waste on a business that’s minimally profitable and needs a convenience store or car wash to survive. One by one, the borough’s gas stations have been bulldozed to make way for condos and offices — a dynamic that’s been playing out for years in compact, pricey San Francisco, which now has 92 gas stations, according to the California Energy Commission, versus 139 EV charging sites.

But as New York City officials push to deploy more EV chargers across all five boroughs, Manhattan’s numbers will only grow more lopsided. And the location of those chargers illustrates a fundamental change that electric cars will bring: Future drivers can expect to do the bulk of their refueling at home or at work, not at a station on the corner.

Most of Manhattan’s public chargers exist in a broad arc from the Upper East Side and Upper West Side down through Midtown, although there are plenty farther south as well. Unlike the borough’s gas stations, most of which can be found north of Central Park, there are few EV chargers above 110th Street.

A significant number of Manhattan’s public charging stations sit in parking garages, usually with several chargers at each site. Many sites have Tesla Inc. chargers that are designed strictly for that company’s cars (although other EVs can use Tesla’s lower-powered “destination” chargers with an adapter). All but a handful of the borough’s public chargers are “level 2” devices that take several hours to top off a car battery, rather than speedier “DC fast” chargers.

New York officials are eager for more curbside options — a city website extolling the benefits of curbside charging lists just 35 such locations in all five boroughs — but for now locating a charger can take a little planning. Depending on the garage, chargers are either self-serve or valet, and some will give monthly customers priority access, while others are first-come, first-serve. Prices vary depending on the garage: Some offer a flat rate such as $20 for a charge, in addition to the garage’s regular parking fee. Others levy an hourly charging fee — $3 an hour, for example, or whatever fee is assessed by charger operators such as Blink Charging Co. — in addition to the garage’s regular parking price. Still others only charge for the parking and give away the electricity as a perk. A recent, weekday survey of six garages found most of the charging spots filled, and one broken charger.

Sherry Boschert of Lebanon, New Hampshire, used the PlugShare app to find a refueling spot for her Tesla on a recent visit to the Upper West Side. She chose a valet garage on West 75th Street, a block from her hotel. All Boschert, 66, had to do was hand over the key fob and pay the regular parking fee — the electricity came free.

“Once you’re off of gasoline and you don’t have to go to those stinky, dirty, crowded gasoline stations, you don’t want to go back,” says Boschert, an author and longtime EV advocate. “And it costs a lot less.”

New York drivers haven’t exactly rushed to ditch gasoline. Fully electric cars and plug-in hybrids account for 8.9% of new passenger vehicles in the city this year, according to research firm Atlas Public Policy. That’s up from 6.6% last year but still well behind Los Angeles, where 13.8% of new cars this year run on electricity. It’s an issue for New York City officials, whose plans for fighting climate change call for having 400,000 EVs on city streets by 2030 and 1.6 million by 2050, up from 24,000 now.

Even if Manhattan’s gas stations have been done in primarily by real estate prices, ChargePoint’s Romano says electric cars will put more pressure on gas station owners, particularly those dependent on selling fast food and car washes. Eventually, “range anxiety” — the fear of an EV running out of charge on the road — will be more applicable to owners of gas-powered vehicles.

“If no one’s visiting for gas, that means no one’s going to the convenience store,” Romano says. “It starts to slide, and it doesn’t take much to flip that business upside down.”