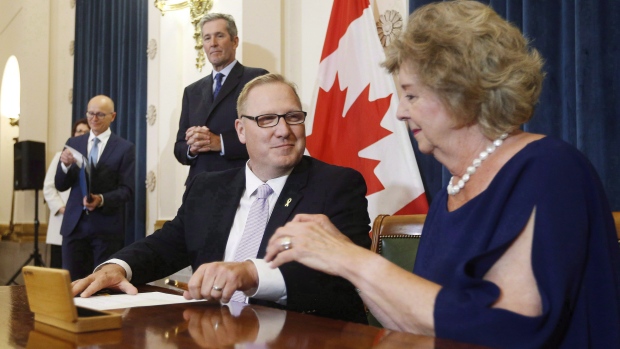 Scott Fielding, MLA for Kirkfield Park, centre signs documents with Lieutenant Governor Janice Filmon after he is sworn into cabinet as the new minister of Finance and minister responsible for the civil service during Premier Brian Pallister's cabinet shuffle announced at the Manitoba Legislature in Winnipeg on August 1, 2018. , The Canadian Press

WINNIPEG - The Manitoba government is signalling there will be more fiscal restraint in Thursday's budget and is warning school boards to keep their taxes in line.

Finance Minister Scott Fielding says this week's budget will continue the battle to end a string of deficits that started under the former NDP government.

Education Minister Kelvin Goertzen says he will try to ensure school boards follow a government directive to keep their property tax increases to a maximum of two per cent.

Goertzen says any division that enacts a higher tax increase -- such as the Winnipeg School Division is considering -- will be directed to cut administration costs next year.

There will be at least one tax break -- the province has decided not to charge the provincial sales tax on top of the federal carbon tax that takes effect in April.

Fielding says a tax on tax would not be fair, and the government's decision will save Manitobans a total of about $3.6 million a year in heating costs.