The sharp run-up in interest rates during the last quarter of 2016 took a big bite out of Manulife Financial's fourth-quarter profit.

The company booked a $1.2-billion charge in the period as a result of "the direct impact of markets." While that caused net income to plunge 74 per cent, CEO Don Guloien is shrugging off the one-time hit.

"The bottom line is, this is a lot of noise," he told BNN in an interview Thursday afternoon. "We feel very robust about our future.”

Manulife's U.S. division was its biggest profit driver in the final quarter of 2016, with core earnings reaching $471 million, versus $332 million a year earlier. The prospect of a lighter regulatory touch in the United States under the Trump administration is much less consequential to Manulife's outlook than the state of the economy, according to Guloien.

"The more important thing is that the underlying U.S. economy is doing well," Guloien said. "If there is less regulation and some more positive things in terms of economic growth, the U.S. will be doing really, really well. And that's good for us."

VOTE! Which company are you most likely to invest in following the latest earnings results?

Like other insurance companies, Manulife is expanding in Asia as the region's burgeoning middle class looks to save and invest. It has benefited from a partnership with Singapore's DBS Group, in which Manulife sells its products through the lender’s Asian branch network.

On a core basis, Manulife earned $0.63 per share in the quarter. Analysts, on average, expected $0.51 per share. For the full year, it met its target to achieve core earnings of $4 billion. Manulife also announced it is raising its quarterly dividend 11 per cent to $0.205 per share.

“Very small swings on that big an asset base can produce quite big swings to the earnings,” said Michael Decter, president and CEO of LDIC Inc., in an interview with BNN. “But you’ve got to look past that to the core [profit]; and Manulife is not only back, but growing at quite a good rate. 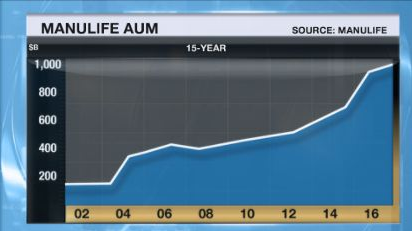 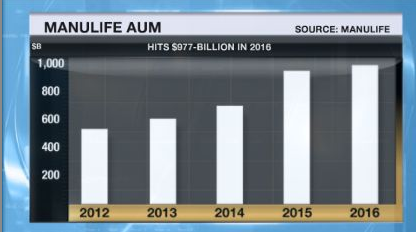 “Manulife is a complex story. You have a lot of moving parts because they are in several difference businesses.… If you’re thinking about this as an investment, you should look at the core earnings -- which were very strong – and trust enough that the Manulife people will sort out this interest-rate-hedge situation.”

Manulife closed the calendar year with $977 billion in total assets under management and administration, a six per cent increase from a year prior -- and putting the company close to breaking through the trillion-dollar threshold.

"I suspect before I retire it will be $1 trillion, and that makes my feel very proud," Guloien said.

With files from Reuters