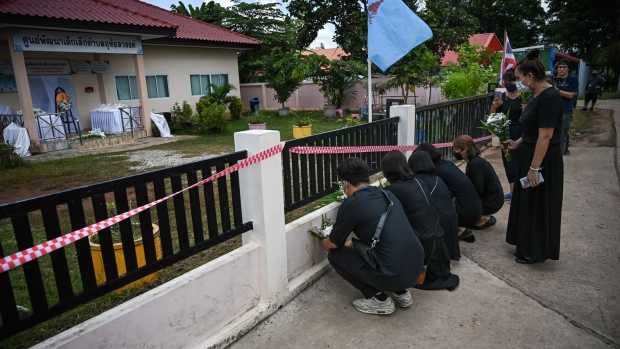 (Bloomberg) -- A day after a former cop involved with drugs went on a killing spree in Thailand that left two dozen pre-schoolers dead, calls are mounting for a national crackdown on the cartels that traffic billions of dollars of illicit substances a year.

Former premier Thaksin Shinawatra urged the government to “speed up the suppression of drugs, especially methamphetamine tablets.” The former prime minister, who is in self-imposed exile, led a yearslong anti-drugs war in the early 2000s in which about 2,500 people were killed.

The perpetrator of Thursday’s massacre, Panya Kamrab, had been dismissed from the police force after being arrested for illegal possession of drugs in January. He was due to attend court on Friday. Thirty-six people died in the knife and gun attack that started at a daycare center in Nong Bua Lamphu province, near the Laos border, before he took his own life.

Despite speculation that the 34-year-old had been under the influence of methamphetamine tablets, commonly known as meth, a blood test found no trace of the drug, police said.

Even as King Maha Vajiralongkorn and Prime Minister Prayuth Chan-Ocha led the nation in mourning -- announcing plans to meet with the families of victims and ordering national flags to be flown at half mast -- the political fallout from one of the worst mass shootings in Thailand’s recent history had begun.

Party leader Cholnan Srikaew said that if voted to power, Pheu Thai would devise a “war on drugs” policy to “totally eradicate” drugs.

Thailand is the main conduit for drug trafficking along Southeast Asia’s vast Mekong river valley, with enforcement agencies often turning a blind eye. Southeast Asia’s organized crime economy, including the illicit trade in drugs and wildlife, was worth an estimated $130 billion in 2019, according to the United Nations Office on Drugs and Crimes.

However human-rights activists are highly critical of the kind of anti-drug campaigns followed by former Philippine President Rodrigo Duterte and Thailand’s Thaksin, saying extra-judicial killings are a major outcome.

Thaksin’s campaign, which began in 2003, included the arrest of suspected drug traffickers and the punishment of state officials for failing to control the drugs trade. He blamed crime syndicates for the related deaths, saying gangsters killed suspects to prevent them passing incriminating evidence to the police.

The government had been “strict and efficient about drug suppression, arrest, and rehabilitation efforts, but after this incident we will review what we can do more,” said deputy spokeswoman Rachada Dhnadirek.

Thursday’s mass killing also turns the spotlight on Thailand’s gun control rules. Kamrab used a pistol that had been obtained legally, according to police. A soldier who killed 29 people at a shopping mall in Nakhon Ratchasima in 2020 used a military rifle.

Attacks on the public by members of the police and armed forces are “a reflection of a deeply rooted culture of violence among government officials,” said Rangsiman Rome, a spokesman for the opposition Move Forward party, in a statement.

Former senator Jon Ungphakorn called for “strict gun control measures, similar to those in Japan, Britain, and other European countries,” in a Facebook post, adding “this could only be achieved under a constitution-abiding civilian government.”

Political analyst Somjai Phagaphasvivat said gun-possession rules for police and military personnel should be aligned with those for civilians, and that authorities needed to be “more serious” about controlling distribution of methamphetamine tablets.

“We’re very saddened by the incident” in Nong Bua Lamphu, Rachada said. She added that the government would “speed up actions on what needs improving or tightening” in its drug and gun policies.