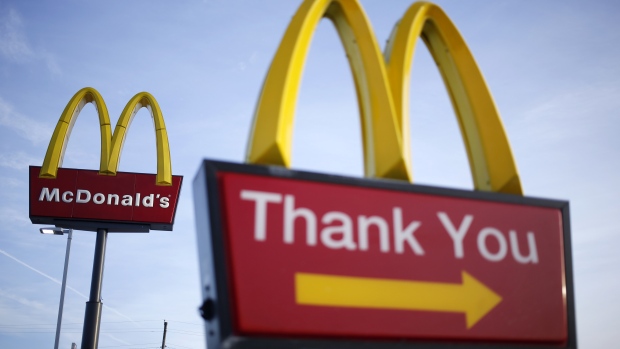 Signage is displayed outside a McDonald's Corp. fast food restaurant in Carrolton, Kentucky, U.S., on Monday, Jan. 21, 2019. McDonald’s Corp. fired Chief Executive Officer Steve Easterbrook because he had a consensual relationship with an employee, losing the strategist who revived sales with all-day breakfast and led the company’s charge into delivery and online ordering. , Luke Sharrett/Bloomberg

McDonald's says it has likely reached the trough of global restaurant closures due to COVID-19, with 25 per cent still shuttered. But business has been slow to return as lockdown orders continue to disrupt consumers' routines.

McDonald's said Thursday its sales fell 6 per cent to US$4.71 billion in the January-March period. Declines have persisted in April.

Worldwide, 75 per cent of the fast food giant's 39,000 stores are open. Kempczinski said locations are gradually reopening according to local regulations.

In China, where 25 per cent of stores were closed in February, nearly all have reopened; 99 per cent of U.S. stores are open as well, offering limited menus and takeout food. But most stores remain closed in some key markets like France, the United Kingdom and Italy.

When stores do reopen, business is generally slow, especially at breakfast, McDonald's said. In China, for example, same-store sales - or sales at locations open at least a year - were down 20 per cent in the first quarter. Those declines narrowed in April, but were still in the mid-teens. U.S. same-store sales were down 20 per cent in April, slightly better than the 25 per cent declines in the last part of March.

And even at stores that remained open through the crisis, business has changed. Before the pandemic, drive-thru made up two-thirds of McDonald's U.S. sales. Now, drive-thru accounts for 90 per cent of sales. In Canada, delivery sales have shot up 40 per cent. In Australia, stores are selling milk, eggs and other grocery items in addition to food.

Kempczinski said McDonald's is well-positioned as business returns, since customers are craving routine, comfort food and value. When one restaurant recently reopened in Austria, there was a two-mile line of customers waiting for food.

“There's a desire to return to familiar favourites,” he said.

Kempczinski said there have been no disruptions to food, packaging or equipment supplies despite the coronavirus-related shutdown of some meat processing plants in the U.S.

McDonald's started the year strong. Through February, its same-store sales were up 7.2 per cent worldwide and 8.1 per cent in the U.S. But sales tumbled in March as global lockdowns took hold. McDonald's ended the quarter with same-store sales down 3.4 per cent.

McDonald's said earlier investments in digital ordering and delivery have helped it weather declines in in-store traffic. Around 25,000 McDonald's worldwide now offer delivery, while 20,000 let customers order and pay on their mobile phones.

The company said it is supporting franchisees by deferring rent and royalties in most markets around the world. That has amounted to US$1 billion in assistance, McDonald's said. The company has also obtained more than 120 million face masks for its employees.

Chicago-based McDonald's said its first-quarter earnings fell 17 per cent to US$1.11 billion, or US$1.47 per share. That fell short of the US$1.57 per share that Wall Street forecast, according to analysts polled by FactSet.

The company shored up its finances in March by raising US$6.5 billion in debt markets. It also plans to conserve cash by reducing the number of new restaurant openings this year. McDonald's has withdrawn its 2020 financial guidance and its long-term outlook.