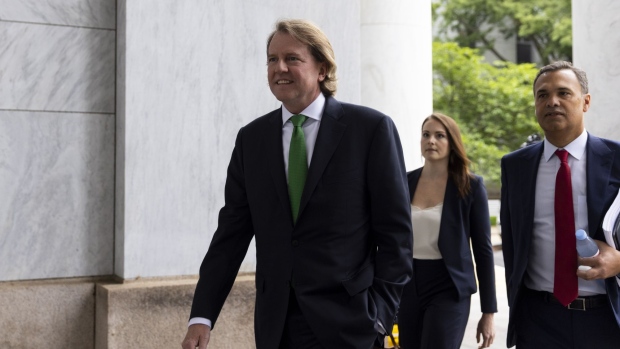 Donald McGahn, former White House counsel, arrives to the Rayburn House Office building in Washington, D.C., U.S., on Friday, June 4, 2021. McGahn is testifying behind closed doors to the House Judiciary Committee about Russia's interference in the 2016 election after a long-running legal dispute over his refusal to comply with a committee subpoena. , Bloomberg

(Bloomberg) -- Former White House Counsel Don McGahn repeatedly warned then-President Donald Trump that any pressure he exerted that resulted in Special Counsel Robert Mueller’s firing might constitute obstruction of justice, according to his testimony in closed-door interview with members of the House Judiciary Committee.

In a 241-page transcript of the interview released Wednesday, McGahn mostly confirmed the testimony Mueller had documented from McGahn and included in the report on his investigation into Russian interference in the 2016 election.

McGahn said Trump repeatedly and urgently directed him to call then-Deputy Attorney Rod Rosenstein to press him on what Trump argued were Mueller’s conflicts that shouldn’t allow him to serve as special counsel. McGahn declined, but indicated the requests put him in an uncomfortable position and that he considered resigning.

“It was the feeling of being trapped and being felt that I was being pushed to do something that was really not in the best interests of the president, in addition to my own concerns about my role,” McGahn said. “And I felt, at that point, you have to be prepared to walk away, particularly as a lawyer, in certain situations.”

But McGahn said he didn’t witness any actions by the former president that violated a criminal statute, including obstruction.

McGahn confirmed Trump’s distress when then-Attorney General Jeff Sessions informed him of the appointment of a special counsel. As recounted in the Mueller report, according to McGahn, “This is terrible. This is the end of my presidency.”

McGahn also acknowledged that it later worried him that Trump wanted to remove Sessions as attorney general.

While McGahn stuck to the testimony he had already given in Mueller’s investigation, Democrats and Republicans on the committee had starkly different interpretations of his remarks to them, delivered over eight hours last Friday, and the key points.

Committee Chair Jerrold Nadler, a New York Democrat, said in a statement that McGahn provided “substantial new information—including firsthand accounts of President Trump’s increasingly out of control behavior, and insight into concerns that the former president’s conduct could expose both Trump and McGahn to criminal liability.”

Nadler also said that McGahn confirmed that Trump lied when he denied the accuracy of the Mueller report, and acknowledged that he was the source for a Washington Post article that confirmed Trump’s direction to McGahn to have Mueller removed.

Representative Jim Jordan of Ohio and other panel Republicans underscored in their statement that McGahn testified very specifically he never saw anything illegal or unlawful during his time as White House counsel, including obstruction of the investigation into Russian interference and whether the Trump campaign conspired in that interference.

McGahn’s testimony Friday marked the end of a two-year legal standoff over whether an executive branch official could be forced to testify to Congress, with agreed-upon limits to the questioning that did not provide either side with a clear-cut legal victory.

The transcript shows committee lawyers Democrats and Republicans took turns questioning McGahn, who left the White House in October 2018 and who is now is a lawyer in the Jones Day law firm. Throughout, McGahn stuck to confirming what was in Mueller’s report.