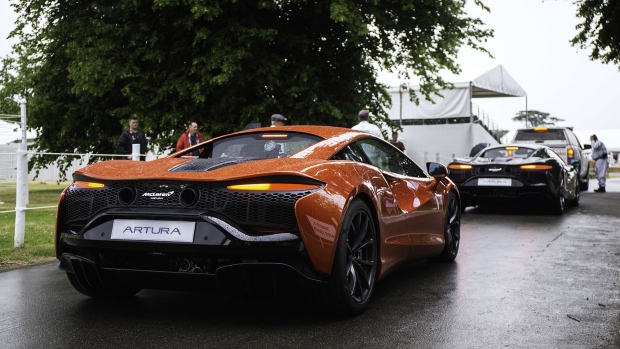 (Bloomberg) -- McLaren Holdings Ltd. is in talks with shareholders about at least £250 million of potential new money to strengthen its balance sheet following delivery delays to its Artura hybrid supercar, Sky News reported.

While the company has started discussions with shareholders, which include Bahrain’s sovereign wealth fund Mumtalakat Holding Co. and Saudi Arabia’s Public Investment Fund, the size of the potential cash injection is yet to be determined, Sky reported on Saturday, without saying where it got the information.

The funding would be in addition to other money McLaren has recently secured from its shareholders, with the company having sought emergency financing multiple times during the past few years amid lengthy delays in launching its Artura model.

Bloomberg reported on Friday that McLaren had recently sold some of its prized heritage car collection to Mumtalakat, with the investor agreeing to support the company with £100 million of fresh liquidity. During the summer, the shareholders had instead given McLaren £125 million through convertible preference shares.

McLaren reported a loss of £203 million in the nine months through September, widening from a loss £69 million a year ago. Liquidity at the end of the third quarter declined to £87 million from £171 million.

The company said on an investor presentation published earlier this week it was “in active discussions with key shareholders regarding a broader recapitalisation of the group.” Lazard Freres & Co. Ltd. is acting as financial advisor to the company.