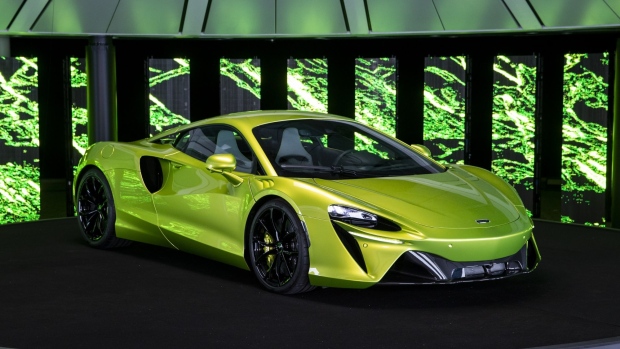 The super-car maker was forced to seek an injection of funds after identifying “certain technical upgrades” on its Artura hybrid supercar that triggered delivery delays, McLaren said earlier this week during its third-quarter earnings. Its main shareholder -- with Mumtalakat owning a near 60% stake -- agreed to support the company with an additional £100 million ($123 million), the company said.

A McLaren spokesman confirmed the sale of some heritage vehicles to the company’s main shareholder in return for the cash infusion, without elaborating on the details of the cars sold.

McLaren’s heritage vehicles count 54 rare Formula 1 racing cars and F1 supercars, according to its 2021 annual report. The same report states that the company sells cars from its collection from time to time.

“We are in active talks with all shareholders regarding a recapitalization of the group,” McLaren said on the call, indicating the additional funds won’t be enough. It’s also continuing talks for potential partnerships.

McLaren reported a loss of £203 million in the nine months through September, compared with a £69 million loss a year ago. Liquidity at the end of the third quarter declined to £87 million, down from £171 million.

The British marque has sought emergency financing multiple times over the past few years from shareholders amid long delays in the launch of the Artura. The latest round of fundraising comes just months after its shareholders -- which also include investment firm Ares Management Corporation and Saudi Arabia’s Public Investment Fund -- gave £125 million through convertible preference shares.

(Updates with details of loss and liquidity position in sixth paragraph)