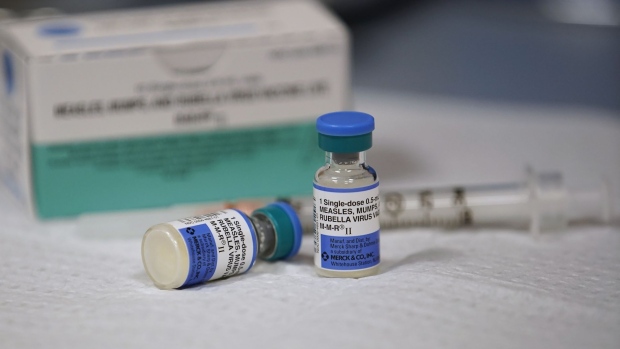 (Bloomberg) -- Measles is threatening to make a comeback in children after a record shortfall in vaccination rates during the pandemic, world and US health officials said.

Nearly 40 million children around the world missed a measles vaccine dose in 2021, according to a joint report from the World Health Organization and US Centers for Disease Control and Prevention. That raises the risk of the highly infectious respiratory virus in the US and other countries where it’s been rooted out by immunization campaigns.

Declining disease surveillance and disruptions in immunization campaigns during the pandemic have helped make measles an “imminent threat” around the world, according to the report. Vaccination coverage for US children younger than 2 is currently hovering at 90.4%, far below the 95% level needed to keep the disease at bay, according to CDC data.

“The record number of children under-immunized and susceptible to measles shows the profound damage immunization systems have sustained during the Covid-19 pandemic,” CDC Director Rochelle Walensky said in a statement.

Measles can be prevented with two doses of vaccine that are routinely included in US childhood shots that also prevent mumps and rubella. Campaigns led the US to measles eradication in 2000, but imported cases from parts of the world where the virus still circulates cause sporadic outbreaks. In 2018, an imported case sparked a flareup that tore through an unvaccinated community in New York, eventually infecting 649 people.

More than 13% of US children are now susceptible to measles due to declines in vaccine coverage during the pandemic, according to a separate study published in July in the journal Vaccine, and the disease already appears to be slipping through coverage gaps. An ongoing outbreak in Columbus, Ohio has infected two dozen unvaccinated kids. Nearly half of them were hospitalized, local health data show. The highly contagious virus, which spreads through coughing and sneezing, has already moved through 11 Columbus-area daycare facilities.

Almost two-thirds of the Ohio cases are in 1- to 2-year-olds, all of whom are unvaccinated against measles, mumps and rubella. MMR vaccine coverage among Ohio kindergartners fell from 92.4% during the 2019-2020 school year to 89.6% in the following year, according to the CDC.

“What’s happening in Ohio may be a harbinger of things to come,” Robert Bednarczyk, a global health and epidemiology professor at Emory University in Atlanta who helped write the Vaccine paper, said in an interview. “When you factor in Covid declines in primary care visits, is this going to start raising questions about other routine vaccinations?”

Clusters of measles-susceptible children could reignite transmission within in the US. Symptoms usually begin with a fever, cough, runny nose and watery eyes. Tiny white spots then start to appear inside the mouth, followed by a red blotchy rash. Serious cases can cause pneumonia.

“Highly infectious diseases like measles act as the proverbial canary in the coal mine, identifying weaknesses in public health infrastructure,” Bednarczyk and his colleagues said in their July paper. “Where childhood vaccination rates dip, measles will often be the first pathogen to re-emerge.”