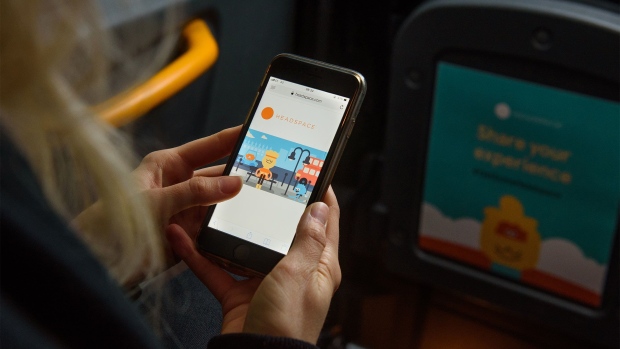 (Bloomberg) -- Before the pandemic relegated most meetings to video conference, employees at the mental wellness app Headspace gathered each morning at 10 a.m. for a guided meditation led by the company’s co-founder, a charismatic Brit and former monk. They sat on wooden benches in Headspace’s airy, sun-drenched office in Santa Monica, California, taking deep, calming breaths.

But the rest of the workday at Headspace was often less Zen. While the company’s raison d’etre was to promote mental health and well-being, many staffers described working intense hours, skipping family functions to meet deadlines and a high rate of turnover. In interviews with more than 20 people who worked at the startup from before the pandemic through earlier this year, employees depict an intense and sometimes grueling work environment.

“I absolutely had to go to therapy,” said one former staffer, who like other people who talked to Bloomberg, spoke on condition of anonymity in order to preserve their future job prospects. Three other people also said they started seeing psychiatrists to help process the stress of working at the company.

Headspace was founded with a mission “to improve the health and happiness of the world.” But startups with lofty goals can often find themselves in awkward positions when they reconcile those values with actually making money. At Headspace, new recruits were sold the idea of a gentler, more mindful workplace, only to find that the company demanded the same grinding schedules they heard about at other startups. “This is the downside of monetizing meditation,” said Diana Winston, director of mindfulness education at the Mindful Awareness Research Center at the University of California, Los Angeles. “It’s not like we’re going to stop the forces of capitalism.”

The company is now called Headspace Health after a merger with wellness app Ginger completed late last year — going from about 300 employees before the merger to 1,100 today. The startups were valued at $3 billion combined at the time of the deal. “Our employees are central to our mission and integral to our success,” Headspace Health said, disputing the characterization of its culture as unusually demanding. “At Headspace Health we remain focused on living out our mission and values, and best serving all of our stakeholders—most importantly, our own employees.”

Simon Perry, a former human resources executive at Headspace, said that the company’s mission was part of what drove employees to work hard. It was challenging to log off at the end of the work day, knowing that Headspace’s app was helping users who may be going through difficult times, he said. “I had a real hope and heart for growing a business through the lens of our mindful practices,” Perry said. He said he pushed himself, and his team, to ensure they were still finding work-life balance, but “in any startup, it is challenging.”

Today, as the economy reels and venture capitalists scale back investments, funding for digital health companies dropped 36% in the first quarter of this year compared to the previous quarter, according to the research firm CB Insights. Globally, average weekly downloads of the Headspace app in 2022 fell by almost half from highs in 2020, the year the pandemic began and the US saw a divisive presidential election that strained Americans’ mental reserves. But there are still plenty of people looking for some peace through meditation: Headspace has been downloaded more than 2.5 million this year alone, according to Data.ai.

Headspace got its start in 2010, founded by Rich Pierson, who worked in the advertising industry, and Andy Puddicombe, the former Buddhist monk with a degree in circus arts. Its programming walks users through meditations and other calming exercises. Headspace was one of the first tech companies to become popular for melding wellness and an iPhone app, promising the ability to be more mindful, calm and present.

Within the company, however, there was no mistaking that Headspace was first and foremost a business operating in a competitive market, even in the early days, employees say. In 2017, the startup gathered staff for the unveiling of a wall mural emblazoned with new corporate slogans, according to one person who was present. The person recalled that “kindness” had dropped off the official list of values. The new ones were “courageous heart,” “curious mind” and, notably, “selfless drive.” Asked for comment, Headspace Health said that after the merger it updated its corporate values, which now include seeking out diverse perspectives and acting with integrity.

During the pandemic, demand for Headspace’s services surged, with millions of people downloading the app, Data.ai numbers show. The company’s monthly bookings shot up by an average of 14% to 18% in 2021, according to documents viewed by Bloomberg.

At the same time, workplace demands at Headspace went into overdrive, former employees said. Working from home, some people described sitting through back-to-back Zoom meetings for 12 or more hours. One person remembers crying along with colleagues over video conference more than once at the end of the day because they hadn’t had time to eat lunch or use the bathroom.

To be able to fit in a meal during marathon meetings, another former employee developed a new habit that wasn’t necessary in other jobs before or since. Over the weekends, this person would prepare small lunch containers—brown rice, chicken and vegetables apportioned for every single workday—an attempt to eat healthy to compensate for a lack of physical activity during days of as many as 20 calls. The person said they would briefly turn off their camera during meetings to scarf down the meal.

The company did make some efforts to lessen the stress, including scheduled meditation breaks, no-meeting Fridays and “Mind Days” — a Friday off every other week. However, because the actual workload didn’t change, many employees simply worked through the days off, two people said.

During the Black Lives Matter protests, as many companies grappled with issues of diversity, worries over inclusion at Headspace came to the fore. The topic of diversity at the startup was the subject of a tearful meeting in 2018, said one person who was there. Some employees felt the app had been slow to add diverse teachers—it had relied on Puddicombe’s voice alone for years—and hadn’t included a woman until 2019. In 2020, more than 100 workers, or about a third of Headspace’s workforce, signed a petition calling for increased representation at the company and on the app.

Soon after, Headspace announced that John Legend would be its chief music officer and debuted a partnership with comedian Kevin Hart’s production company. And as it added more teachers outside of Puddicombe, the company improved representation on its app: In a statement provided to Bloomberg, Headspace Health said 60% of teachers in its app identify as female and 40% identify as non-White. The company also recently elevated Wizdom Powell, its diversity chief and a Black woman, to an executive role. In the statement, Headspace Health said, “As we grow and scale our business, we continue to build a diverse culture where our employees feel included and empowered to show up fully as themselves and do their best work.”

In recent years, Headspace has seen significant management turnover. One former staffer described having five bosses in two years because of turnover and reorganizations. Another person said they had eight bosses in three years. The company got a new chief executive officer in early 2021, only to see that person replaced by the end of the year after the merger. The upheaval took a toll: Some employees described spending time on projects only to have them abruptly cancelled, partly because people kept leaving. One initiative, set to launch on a Monday at 8 a.m., was shut down the night before, one person said. Another person said they worked nights and weekends with teammates for more than three months on a project that was ultimately canned.

Employees took to the anonymous company rating service Glassdoor to air their grievances. One person posted a review titled: “WORKING HERE WILL GIVE YOU ANXIETY!!!" For some time, Perry, the human resources executive, responded to negative reviews, including this one. He seemed to acknowledge there was room for Headspace to improve. The company was working on communication and decision-making processes “in the hope that we can support better ways of working here,” he wrote.

Responding to a comment that Headspace was “not how it seems from the outside,” Perry wrote, “With any scaling startup, we need to constantly remind ourselves of the importance of keeping a work-life balance.” Perry left Headspace in April.

Last summer, Headspace announced the merger with Ginger, a startup that offers mental health coaches who respond over text message. As of the month after the deal closed, attrition at Headspace was 25% for the year, according to documents viewed by Bloomberg. That’s higher than the sub-20% attrition rate for tech companies in 2021 reported in a survey by the investment firm Iconiq Growth. Headspace’s goal at the time was attrition of 15%. Ginger’s attrition rate was 8% before the merger and went up to 12% around the time of the combination, according to the documents.

Headspace Health said in a statement that turnover at the now-combined company is down to 10% and that any merger will bring change and transition. “We are not immune to the same pressures that other companies feel at this time,” Headspace Health said. “It’s why we continue to add additional benefits and programs” for staff.

Today, some former Headspace employees say they no longer use the app—instead of being calming, it’s now triggering. One ex-employee, who described starting the day at 6:30 in the morning and ending it well into the night, said they often missed children’s performances and doctors’ appointments. When they left the company their family rejoiced. Since then, now at a new job, this person said they talked to a therapist about how to set boundaries between work and life. So far, they said their mental health has improved.