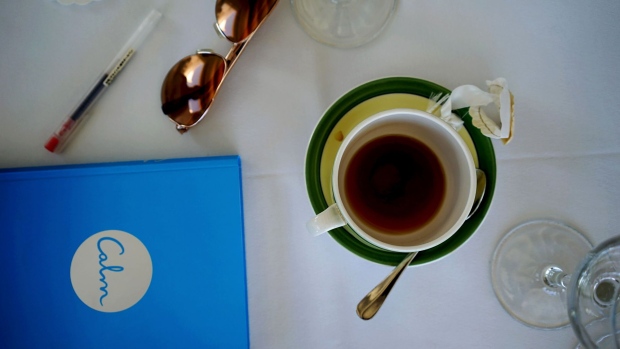 A copy of the manual for the new app "Calm," developed by Michael Acton Smith, chief executive officer of Mind Candy Ltd., sits next to a coffee cup on the conference table at the Saint John Hotel during the International Conclave of Entrepreneurs (ICE) MykonICE event in Mykonos, Greece, on Saturday, Sept. 17, 2016. With Brexit clouds arriving and the deluge of venture-capital cash drying up, the hard-drinking tech bros of London are turning to self-reflection and thinking harder than ever about their real priorities and new realities. Photographer: Loulou d'Aki/Bloomberg , Bloomberg

(Bloomberg) -- The meditation app maker Calm is laying off 20% of its about 400-person staff, the company said Thursday.

Calm’s chief executive officer, David Ko, wrote in a memo to employees, “It is especially difficult for a company like ours whose mission is focused on workplace mental health and wellness.” He said the company would hold “a more in-depth discussion on the future of the business” for remaining staffers on Friday.

Calm, which raised money at a $2 billion valuation in 2020, reigned as the No. 1 stress-reduction app for at least the last three years through May, according to Data.ai, a mobile analytics firm. The job cuts were first reported by the Wall Street Journal.