In a week marked by vertiginous swings in financial markets, a sharp selloff in huge technology companies dragged down stocks on Friday.

Traders just had a lot to digest over the past few days, from Federal Reserve Chair Jerome Powell’s hawkish tilt to uncertainty about how the omicron coronavirus outbreak could affect the global reopening. A mixed U.S. jobs report did nothing to prevent another bout of intense volatility. The reason is: there’s a perception that the data wouldn’t be a game changer, with policy makers likely to follow through with faster tapering of asset purchases amid elevated inflation.

Stocks extended their weekly slide. Electric-vehicle maker Tesla Inc. sank about 6.5 per cent and Facebook parent Meta Platforms Inc. approached a bear market after a 19.7 per cent plunge from a recent peak. Apple Inc. slipped after news reports that phones of a number of U.S. State Department employees were hacked. China’s companies listed in the U.S. slid amid ride-hailing giant Didi Global Inc.’s preparations to leave American exchanges and regulators’ plans to force foreign firms to open their books or risk delisting.

Haven assets like Treasuries, the Japanese yen, the Swiss franc and gold climbed. 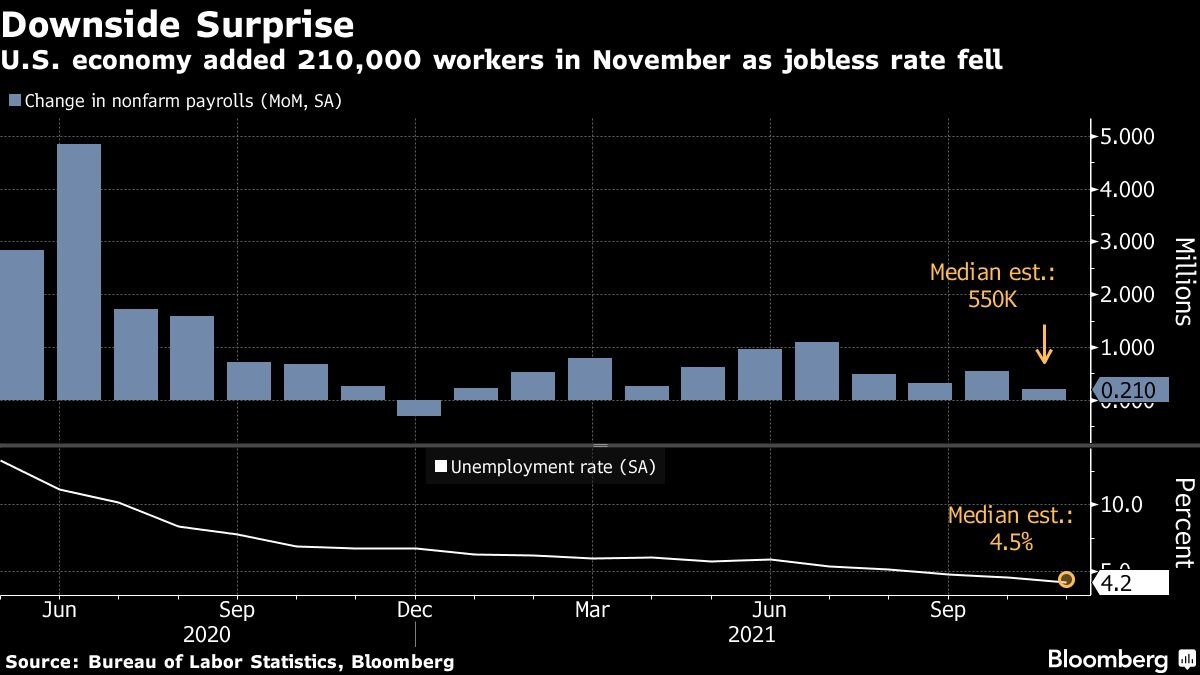 The Fed’s march toward higher rates presents greater risk for stock investors, and the likelihood of a correction in the S&P 500 next year is “elevated,” according to Bank of America’s Savita Subramanian.

“We are in an environment where the dividend yield on the S&P 500 is below where cash yields are likely to be in a year or two,” the strategist told Bloomberg TV.

The U.S. Treasury again stopped short of labeling any foreign economies as manipulators of their exchange rates, while continuing to say that Taiwan and Vietnam met all three criteria for the designation. Switzerland dropped off the list, last published in April, of countries exceeding the three thresholds, with officials saying it violated two of the criteria while narrowly missing a third.