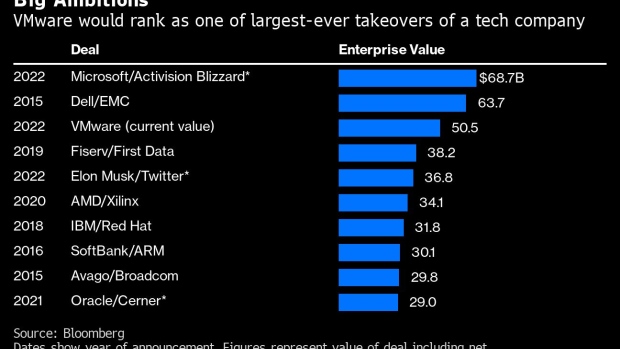 (Bloomberg) -- Broadcom Inc.’s pursuit of enterprise software provider VMware Inc. is set to rank as one of the technology sector’s largest-ever takeovers.

The potential purchase, first reported by Bloomberg News, would be the latest in a series of transactions this year valued at upwards of $50 billion including debt. Megadeals have come roaring back as ambitious chief executives plot blockbuster acquisitions that would transform their industries, even as overall M&A volumes remain down compared to last year’s record pace.

Takeovers of technology companies have been a bright spot for bankers this year, with transaction volumes jumping 46% to $263 billion, according to data compiled by Bloomberg. Broadcom, led by famously acquisitive CEO Hock Tan, wants VMware to gain highly specialized software that powers data centers used for cloud computing.

Tan is hoping a big deal outside Broadcom’s core chip business will allow his empire to grow without attracting attention from regulators in Washington, who have been closely scrutinizing big tech companies. He’s pursuing a megamerger in spite of the uncertainty facing global tech stocks.

The S&P 500 Information Technology Sector index has fallen 25% this year. Broadcom stock is down 18% over the period, while VMware has fallen 17%.

Here’s how an acquisition of VMware might stack up against the biggest-ever deals in the tech industry. Even using its enterprise value at Friday’s close, buying VMware would rank as the third-largest takeover of a tech company on record -- and Broadcom may need to offer a healthy premium, potentially moving the deal even higher up the rankings.