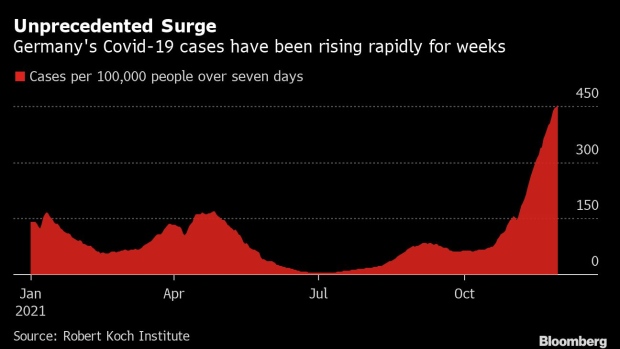 (Bloomberg) -- Chancellor Angela Merkel and her incoming successor, Olaf Scholz, will hold talks with Germany’s 16 state premiers on Tuesday to discuss the next steps in the fight against Covid-19.

The discussions will follow a decision by the Constitutional Court due in the morning, according to an official familiar with their plans. Germany’s top court is expected to lay out parameters for what restrictions are admissible to tackle the nation’s worst outbreak of the coronavirus pandemic.

German authorities are under pressure to introduce new curbs as case numbers climb and the new omicron variant has been discovered in the country.

The incoming coalition may consider tighter measures for large events, as well as for bars and restaurants, said the official, who asked not to be identified because the information is private. The timing of a decision isn’t clear, the person said.

While Merkel has persistently called for more comprehensive contact restrictions, members of the new government under Social Democrat Scholz have stopped short of backing another nationwide lockdown.

Germany registered 29,364 new infections and 73 deaths on Monday, according to data from the RKI public-health institute, as intensive-care units in some hotspots come under increasing pressure. The nation’s death count from the pandemic exceeded 100,000 last week, and the German Air Force began relocating ICU patients as hospital beds fill up.

Merkel is set to leave office next week after the Social Democrats, Greens and pro-business Free Democrats sealed an agreement to form a three-party government.

Scholz and Merkel are working together on setting up a crisis unit this week to coordinate pandemic measures that will be headed by an armed forces general.

Merkel’s office didn’t immediately respond to a request for comment on Tuesday’s meeting.