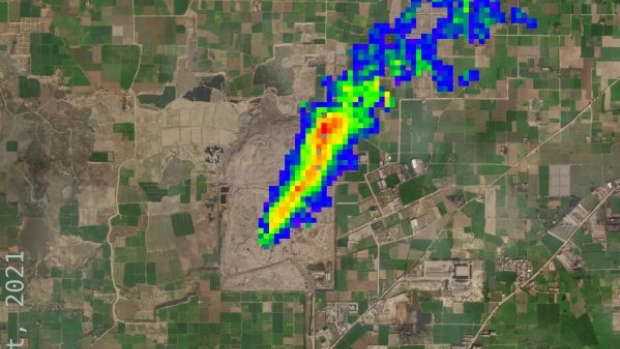 The cloud was seen over Lahore on Aug. 6 and had an emissions rate of about 126 metric tons of methane an hour, according to an estimate from geoanalytics firm Kayrros SAS. That amount of the greenhouse gas would have roughly the same short-term climate warming impact as the annual emissions of 6,200 cars in the U.K. A second, smaller plume was seen above the city on Aug. 31, emitting about 39 tons of methane an hour.

Methane is a super-potent greenhouse gas, with more than 80 times the warming impact of carbon dioxide over two decades. That’s one reason scientists have been calling for rapid cuts to methane emissions in a bid to slow down climate change.

While many large methane leaks come from a relatively easily identified source, such as oil and gas infrastructure, it’s difficult to pinpoint the origins of the ones in Lahore. Other sources of methane include cattle farming, rice production and waste management.

“These kinds of events around cities are very difficult to find the origin of,” said a spokesperson for Kayrros. “Most of the time, it’s different sources that accumulate into methane clouds.”

Lahore has a history of these kinds of leaks. Since the beginning of 2019, Kayrros has analyzed dozens of methane clouds spotted around the city. Kayrros uses data collected by the European Space Agency’s Sentinel-5P satellite.

One potential source could be the Lakhodair landfill in the northeast part of the city, said Bram Maasakkers, a researcher at the Netherlands Institute for Space Research who also uses Sentinel 5-P’s data to hone in on global methane hot spots.

Landfills can produce methane when the waste deposited in them decomposes without the presence of oxygen. The methane can build up for a time until it escapes to the surface and up into the atmosphere.

Following Maasakkers’ work, geoanalytics firm GHGsat, which offers higher resolution detection, captured a large methane plume on July 1 from Lakhodair landfill. The rate of release was about 4 tons per hour, which GHGSat captured using its own commercial satellites. The landfill operators didn’t reply to a request for comment.

Still, a cloud as large as the one detected in Lahore in August likely comes from multiple sources. Leaky cities will have to better understand and account for these emissions in order to limit their impact on the climate.

Scientists consider reduction of methane leaks one of the lowest-hanging climate solutions. Satellites are helping spot these leaks, including from landfills in Bangladesh and Argentina, and highlighting the regions of the world where more action is needed.

Last week, major economies, including the U.S. and European Union, agreed to reducing methane emissions by at least 30% relative to 2020 levels before the end of this decade. The countries are now calling on others to join the voluntary pact in a bid to help the world reach climate goals.