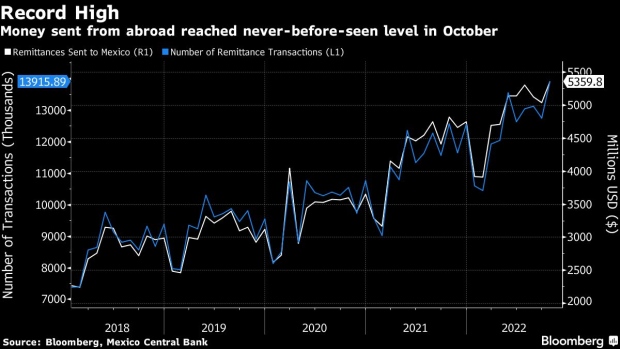 Money sent home by Mexicans who are mainly living in the US totaled $5.36 billion in October, beating analysts’ estimates of $5.11 billion and a previous record of $5.3 billion in July, according to central bank data published on Thursday.

Remittances have been a lifeline for the Mexican economy since the pandemic began, especially helping rural communities as gross domestic product plummeted 8.2% in 2020, with a slow recovery afterward. The money transfers have also helped bolster Mexico’s peso, which has been among the top performing major currencies this year.

Remittances have been helped largely by the recovery of the US economy, leading to higher labor rates for Mexicans abroad, according to a recent report by The World Bank. Swelling volumes of migrants of other nationalities who struggle to cross into the US due to tight border controls are also likely to have increased remittance flows into Mexico from their family members while in transit, according to the report.

“The average wage earned by Mexicans abroad, both men and women, has kept increasing, and that has increased the total earnings. That is what is financing remittances,” said Jesus Cervantes, director of economic analysis at the Center for Latin American Monetary Studies, known as CEMLA.

Migrants from Mexico, Guatemala, Honduras, El Salvador, the Dominican Republic, and Peru are also sending greater portions of their earnings home than before, he said.

“Solid workers’ remittance flows have been adding support to the current account and to private consumption, particularly for low-income families, who have a high propensity to consume and are the overwhelming recipients of such transfers,” Alberto Ramos, chief economist for Latin America at Goldman Sachs Group Inc., wrote in a research note.

--With assistance from Rafael Gayol.

(Updates with Goldman Sachs comment in last paragraph. A previous version corrected the decimal fraction on the number of remittances in headline.)