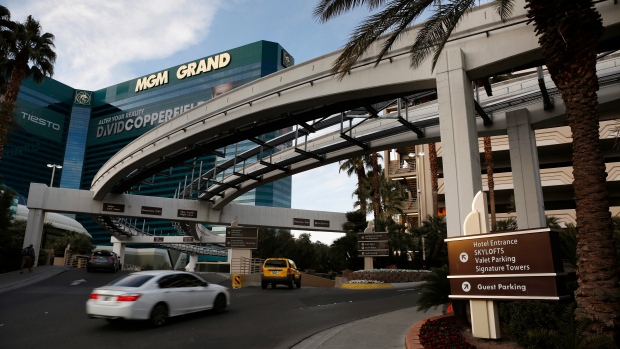 MGM Resorts International expects to announce a buyer for its flagship MGM Grand resort in Las Vegas by the end of year, marking one of the final steps toward its goal of becoming an “asset-light” casino operator.

The company agreed this month to sell the Bellagio resort in Las Vegas to Blackstone Group in a US$4.25 billion deal under which MGM will continue to manage the property. The company is also selling its Circus Circus casino in the city to real estate mogul Phil Ruffin.

Chief Executive Officer Jim Murren said on a conference call Wednesday that he’ll use the proceeds from the MGM Grand sale to reduce debt and invest in new growth opportunities, including a potential US$10 billion casino in Japan and sports betting in the U.S.

MGM Resorts is continuing to evaluate the sale of its remaining real estate assets, including CityCenter -- a joint venture with Dubai World that owns the Aria resort in Las Vegas -- and a reduction in its majority stake in MGM Growth Properties, a real estate investment trust, Murren said.

The company has been under pressure from activist investors to boost its stock price over the past few years. Murren has taken steps do so, including two rounds of companywide cost cutting.

In 2016, the company put the bulk of its properties into MGM Growth. That entity also has an option to purchase a Massachusetts casino, the MGM Springfield, which will become the company’s last wholly owned casino in the U.S. once the MGM Grand sale is completed.

Separately, the company reported third-quarter sales that fell short of analysts’ estimates as result of fewer Asian visitors playing baccarat in Las Vegas. Profit beat expectations on the acquisition of new regional casinos and the addition of new high-roller suites in Macau.

The stock fell as much as 3.4 per cent to US$27.66 in extended trading after results were announced. MGM has risen 18 per cent this year through Wednesday’s close in New York.

Murren reiterated his target of as much as US$3.9 billion in earnings before interest, taxes, depreciation and amortization next year.