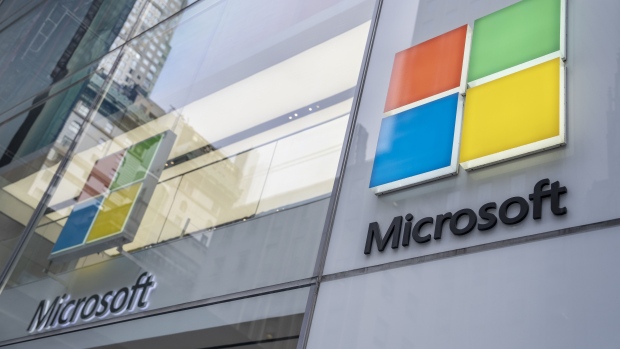 A Microsoft store in New York, US, on Friday, Jan. 20, 2023. US technology stocks are about to hit their next hurdle when earnings season for the most influential segment of the S&P 500 Index gets underway in the coming week: vanishing profits. Photographer: Victor J. Blue/Bloomberg , Bloomberg

(Bloomberg) -- Microsoft Corp. is investing heavily in artificial intelligence, but don’t expect the magic of OpenAI’s ChatGPT to show up in its signature Word program quite yet.

The software giant on Monday announced a $10 billion investment in OpenAI, whose AI tool ChatGPT is trained on troves of data to generate human-like responses to prompts in seconds. Microsoft plans to integrate GPT, the language model that underlies ChatGPT, into its Teams and Office software, racing against rivals such as Alphabet Inc., Amazon.com Inc. and Meta Platforms Inc. to capture the burgeoning market for AI-powered products.

“We're going to lead in the AI era,” Microsoft Chief Executive Officer Satya Nadella said Tuesday during a conference call to discuss fiscal second-quarter earnings. Though he said Microsoft 365, which includes applications like Teams, Word and Excel, is “rapidly evolving” into an AI-first platform, Nadella didn’t offer a specific timeline for that progress.

In the meantime, the company’s revenue growth slowed as corporate and consumer demand softened. The company last week said it’s cutting  10,000 employees, a decision driven in part by economic uncertainty.