Microsoft Corp. shares rose the most since April 2020 on Wednesday after the software giant gave a forecast that reassured investors the company’s Azure cloud-computing business still has potential to drive growth.

The company predicted Azure’s revenue growth rate would pick up in the fiscal third quarter from the second, excluding the impact of currency fluctuations. The stock gained as much as 6.9 per cent in New York. “This will help calm Street tech growth worries,” said Dan Ives, an analyst at Wedbush.

Microsoft’s fiscal second-quarter earnings report on Tuesday showed sales that topped US$50 billion for the first time and profit that exceeded analysts’ estimates, fueled by cloud, gaming and Windows software. But Azure revenue, up 46 per cent in the period, decelerated from recent quarters and missed analysts’ rosiest estimates, sending the stock tumbling before executives issued a more optimistic forecast for the business later in the afternoon.

Chief Executive Officer Satya Nadella has turned the company’s Azure business into a solid No. 2 behind Amazon.com Inc. in the market for cloud infrastructure services -- computing power and storage delivered via the internet -- and has made the unit’s results a closely watched number. But Microsoft faces steep competition for big contracts from Amazon.com Inc. and Alphabet Inc.’s Google, which ranks third but is pouring resources into the business as it works to catch up. 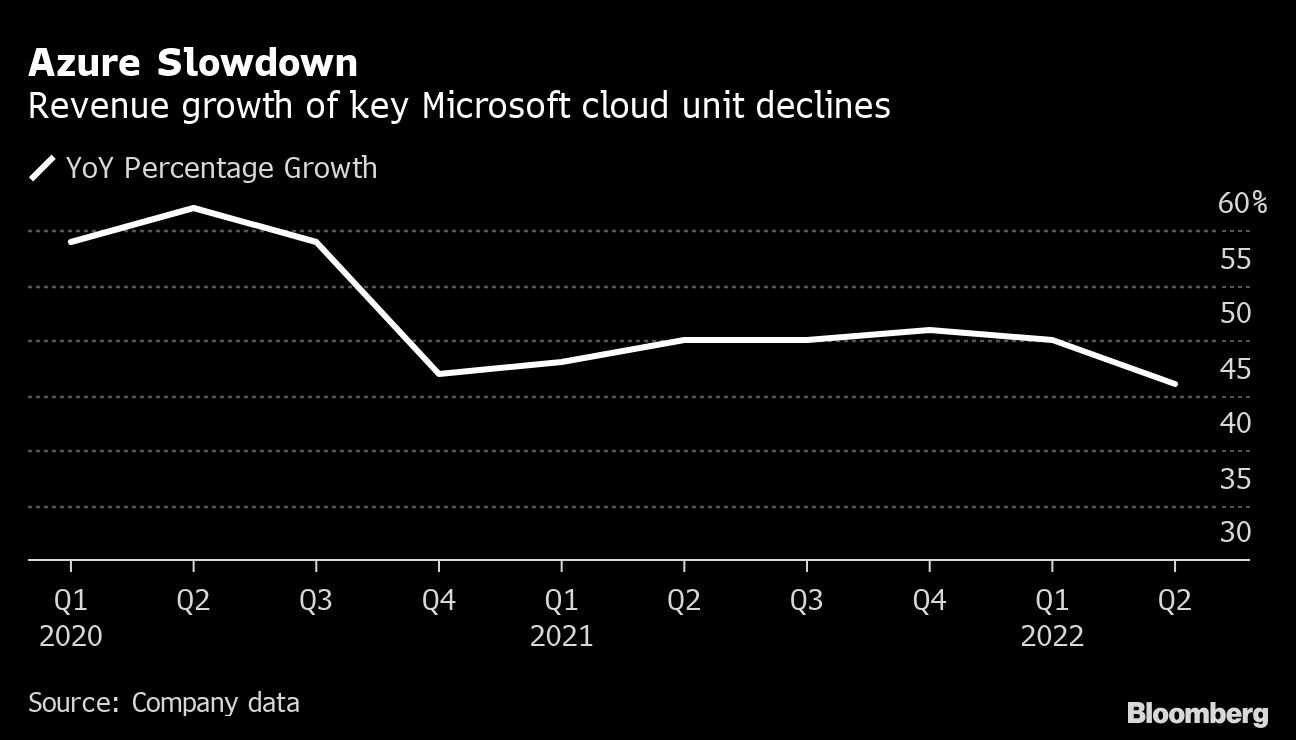 Though Azure revenue in the fiscal second quarter, which ended Dec. 31, came in below the 50 per cent in the prior period and 51 per cent the quarter before, demand was actually better than Microsoft had expected, Chief Financial Officer Amy Hood said in an interview.

“The continuity of the growth in Azure is actually pretty pleasing to us,” she said. “Customers are turning to Azure and the Microsoft Cloud to really fundamentally run their businesses differently.”

Overall revenue in the quarter climbed 20 per cent to US$51.7 billion, the Redmond, Washington-based software maker said in a statement. That was a slight easing from the 22 per cent gain posted in the first quarter, which was the fastest pace in four years. Second-quarter revenue was predicted to be US$50.9 billion on average, according to analysts polled by Bloomberg. Net income rose to US$18.8 billion, or US$2.48 a share, while analysts had predicted US$2.32.

“We’ve kind of hit the highest peak of growth we’re going to see in a while,” Brent Thill, an analyst at Jefferies LLC, said before the results were released. “You have a theme of decelerating growth and harder comps are coming up.”

The software giant is one of the first of the largest technology companies to report earnings, so investors are closely watching the results as a bellwether for results from companies like Apple Inc., which will report on Thursday, and Alphabet, which is on tap next week.

“Microsoft is obviously going to be considered a leader,” Thill said. “Their comments about the world will set the stage for the rest of the tech.”

Other technology stocks including Alphabet and Amazon, whose AWS cloud division is its most profitable, reversed their declines in late trading after Microsoft’s forecast. Microsoft’s guidance should calm nerves for investors in those companies as well, Ives said, noting the outlook will be “big for the tech space in this white knuckle environment.”

Commercial cloud sales in the quarter rose 32 per cent to US$22.1 billion, Microsoft said. Gross margin, or the percentage of sales left after subtracting production costs, in that business narrowed slightly to 70 per cent, the company said in a slide posted on its website. Without the impact of an accounting change, gross margin would have widened by 3 percentage points.

Intelligent Cloud sales, consisting of Azure and server software, rose to US$18.3 billion, meeting the average estimate of analysts polled by Bloomberg. In the Productivity division, mostly Office, sales were also in line with US$15.9 billion average prediction.

In the More Personal Computing division, including Windows, Surface and Xbox, revenue was US$17.5 billion. That topped the average US$16.7 billion projection.

Shortages of semiconductors are still roiling the market for Xbox consoles and Surface devices, but Microsoft and its partners have improved their ability to manage the issues, Hood said, leading to better-than-expected supplies of both categories of hardware in the critical holiday season.

Sales of Xbox machines climbed 4 per cent compared with the year-earlier holiday period, when the new versions of the devices launched but supply was severely limited. Revenue from Xbox content and services jumped 10 per cent in the recent period.

Last week, Microsoft unveiled a deal to acquire Activision Blizzard for US$68.7 billion, buying a legendary game publisher responsible for franchises like Call of Duty and World of Warcraft, but recently roiled by claims of sexual misconduct and discrimination. Microsoft will not update any financial information it gave about the deal today, Hood said in the interview.