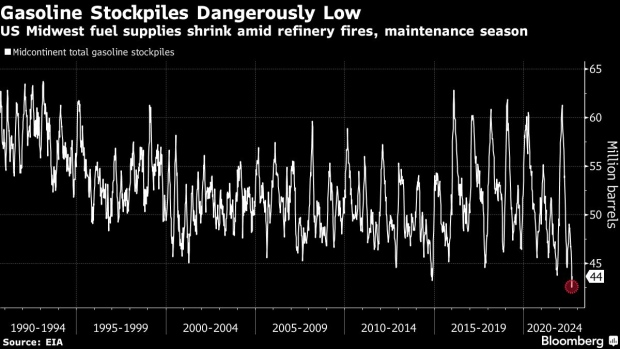 (Bloomberg) -- A refinery fire in Ohio caused gasoline prices in neighboring Indiana to post the largest overnight increase of any state, with Ohio itself and Michigan poised to follow.

Average prices at the retail pump jumped nearly 6 cents a gallon in the Hoosier State, home to a major fuel hub supplying the upper Midwest, according to data from auto club AAA. The rise followed higher wholesale and rack prices, which surged by as much as 40 cents a gallon in some areas of Indiana, according to price reporting agency Opis. Spiking wholesale costs in nearby Ohio means retailers there will likely raise prices in the coming days, and Michigan may see an acceleration of retail gains already underway.

The increases at the pump are a further burden to consumers and contribute to a rise in the national average that snapped a 98-day slide earlier this week. Retail prices typically fall at this time of year after the peak summer driving season and as most of the country switches to cheaper winter-grade fuels. The counter-seasonal price increase is the kind of inflationary force the Federal Reserve aims to tame with its latest interest-rate hike.

While the country’s energy infrastructures have been so far spared by major hurricanes this season, refineries in the Midwest and on the West Coast have reported a series of outages in recent weeks, pushing prices higher. The fall refinery maintenance season currently underway could cut Midwest stockpiles further from the record low seen earlier this month.

Unlike the California market, the Midwest is directly connected to fuel makers on the Gulf Coast via the Explorer pipeline, which delivers fuel directly into the Buckeye Complex, a storage hub in Hammond, Indiana. The pipeline froze nominations shortly after the fire, according to TACenergy, meaning demand to ship on the line is nearing the pipeline’s capacity.