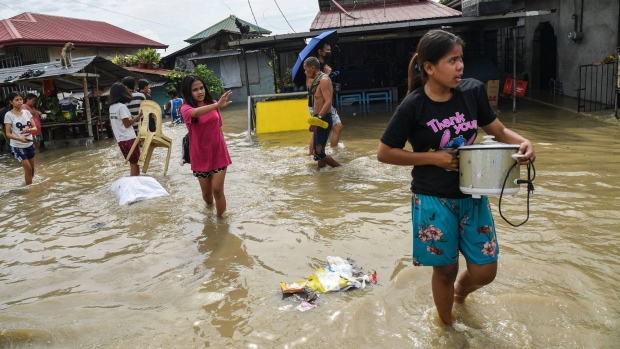 The fatalities were recovered from a flooded area in Bulacan province north of Manila, according to a local police report. The entire provinces of Nueva Ecija and Aurora also north of the capital -- where some 2.5 million reside -- remain without power supply, Energy Secretary Raphael Lotilla said separately at a televised briefing Monday.

Generators will be sent to these areas, Lotilla said. More than 74,000 residents had to flee their homes due to the typhoon, which has moved away from the main island and is forecast to exit the Philippines Monday night on its way to Vietnam. Financial markets, government offices and schools are shut for Sept. 26.

Noru, which rapidly intensified from a tropical storm into a super typhoon over the weekend, also left homes and rice fields flooded. Three-fourths of the nation’s standing rice crops may be affected by the typhoon ahead of harvest, the Agriculture Department earlier said, posing further food supply and inflation risks to the nation that has already experienced shortages.

The Philippines is among the most vulnerable nations in the world to floods and storms, according to Fitch Ratings’ climate change physical risk exposure heatmap rankings. An average of 20 cyclones pass through the Philippines annually, incurring $10 billion in losses from climate-related hazards over a decade, the Finance Department said last year.