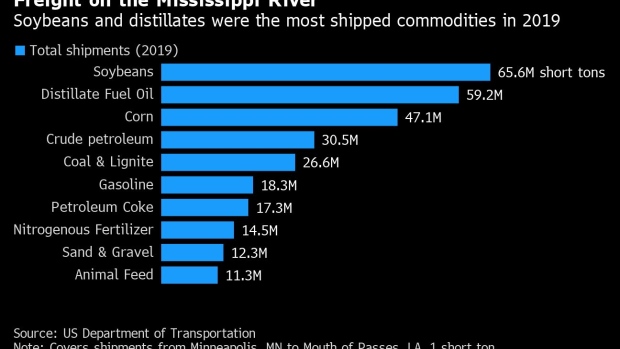 (Bloomberg) -- Prolonged drought is jeopardizing waterborne trade along the Mississippi River, a basin that produces 92% of the nation’s agricultural exports.

As of Friday, the river was still closed near Stack Island, Mississippi, and Memphis, Tennessee. That has resulted in a backup of more than 2,000 barges at various points, according to the US Coast Guard. Dredging activities are currently paused, and officials plan to reopen the waterway with restrictions when it has been determined safe to do so.

The Mississippi River is no stranger to hard times. In 2012, for instance, the Great Plains drought led to $35 billion in losses for the US, including closing the river on at least three occasions. In 2020, the total value of domestic commerce that moved from Minneapolis to the mouth of the river was almost $70 billion, according to the US Army Corps of Engineers.

The drying Mississippi is reminiscent of this summer’s transportation woes on the Rhine River — and both are functions of a Northern Hemisphere drought worsened considerably by climate change. Drought in root-level soil this summer was roughly 20 times more likely north of the tropics, according to a report this week by World Weather Attribution, a scientific research group. The drought caused rivers to dry up around the hemisphere, and caused particular harm in Western Europe, where summer crop yields plummeted.

The timing couldn’t be worse because barges are busy carrying recently harvested corn and soybeans up and down the river, two of the top-three most heavily transported commodity products. Futures prices were little changed for the week, but the soybean cash basis, which better reflects how much farmers will get for their crops, sank to the lowest level in GeoGrain data going back to 2003.

In 2019, more than 65 million tons of soybeans passed along the river from Minneapolis to its mouth on the Gulf of Mexico, US Department of Transportation data show. Distillates -- which include diesel fuel -- ranked second in total shipments. The Army Corps estimates that the Mississippi carries 589 million tons of freight a year, which creates a $12.5 billion annual transportation savings, according to USACE spokesperson Lisa Parker.

The blockages are forcing companies to find other methods to move goods -- such as metals, agricultural products and fertilizers -- while some are postponing planned loadings by barge until conditions improve. Shippers are already seeing costs rise for rail and truck transport.

A prolonged disruption will have heavy implications for the US economy. Barge transport is cheaper than rail and truck, and has a smaller environmental impact. Delays mean coal shipments to fire power plants may not reach their destinations in a timely fashion, potentially raising electricity costs for consumers. It also means more traffic gridlock on US highways and higher costs at the gasoline pump.

One hopper barge carries as much dry cargo as 16 rail cars or 70 trucks, so one 15-barge tow keeps 1,050 trucks off the highways. Barges move liquids effectively, too: one tank barge moves as much as 46 rail cars or 144 trucks, according to the Upper Mississippi Waterway Association.

A spike in truck demand comes at an inopportune time. The September jobs report showed a sizable decline in truck transportation payrolls. Aside from a pandemic-related plunge in April 2020, the 11,400 slump last month was the largest since 2009.