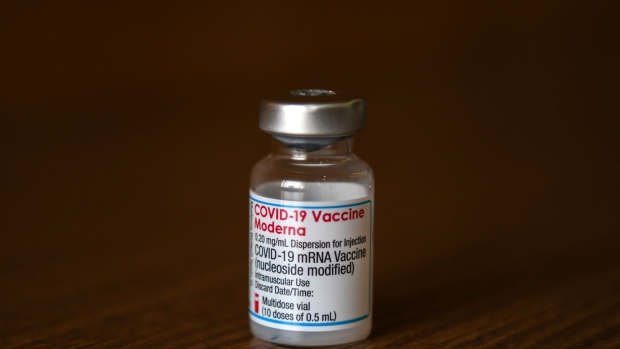 A bottle of the Moderna Inc. Covid-19 vaccine at a mass vaccination site in Saitama City, Saitama, Japan, on Monday, Aug. 23, 2021. Japan's Prime Minister Yoshihide Suga said last week that he expects 60% of the population to be fully vaccinated by the end of next month and plans to distribute enough doses to inoculate 80% of eligible people by early October. Photographer: Noriko Hayashi/Bloomberg , Bloomberg

(Bloomberg) -- Moderna Inc. and the National Institutes of Health are embroiled in an unusually public battle over who gets credit for inventions related to the Massachusetts-based company’s Covid-19 vaccine.

The U.S. government is objecting to Moderna listing only company scientists, and not ones from the NIH’s Vaccine Research Center, as inventors on a patent application. Moderna acknowledged the NIH as “collaborators” but said in a July filing with the U.S. Patent and Trademark Office that it had made a “good-faith determination that these individuals did not co-invent the mRNAs and mRNA compositions claimed” in the specific application.

The NIH’s National Institute of Allergy and Infectious Diseases said in a statement Wednesday that Moderna was willing to list government scientists on a minor patent but “has so far refused to name NIH inventors to the principal patent application that covers the mRNA-1273 vaccine itself.”

“Omitting NIH inventors from the principal patent application deprives NIH of a co-ownership interest in that application and the patent that will eventually issue from it,” the agency said.

Moderna noted in a statement Wednesday that it’s added NIH scientists on other patent applications, including one for dosing. But, it said, there are “strict rules” at the U.S. patent office for determining which inventors to list on an application, and it followed that for this patent on the specific sequence in its Covid vaccine.“We do not agree that NIAID scientists co-invented claims to the mRNA-1273 sequence itself,” the company said. “Only Moderna’s scientists came up with the sequence for the mRNA used in our vaccine.”

The listing of the inventors is critical to determining who can control the patent. If government scientists are listed, it would mean that the U.S. has ownership of the patent and can license it to anyone it wants, even over Moderna objections. If a legitimate inventor is kept off a patent or the wrong inventor is listed, it could later be ruled invalid in court.

It’s the latest dustup over who may have rights to the technology that underlies a vaccine that Moderna said generated $10.7 billion in sales for the first nine months. The company reported Nov. 4 that it sold 510 million doses during that period and has $17 billion of signed vaccine orders for 2022.

The NIH has said that its scientists did much of the underlying work that enabled a vaccine to be developed so quickly after the pandemic began. The agency says its research center developed a prototype coronavirus to create a vaccine for it, and then once the pandemic began it worked with Moderna to develop what the government calls the NIH-Moderna vaccine.

“Each inventor of a patent has equal rights to the subject matter of the claims,” said TJ Mantooth, a lawyer with Hall Estill, who specializes in handling patent applications. “In this case, the fight is over who is an inventor.”

In an interview for a March New York Times article on the development of the vaccine, deputy director of the vaccine center Barney Graham -- one of the researchers the NIH wants added to the Moderna patent -- described it as “We did the front end. They did the middle. And we did the back end.”

Two consumer advocacy nonprofits, Public Citizen and Knowledge Ecology International, have accused Moderna of failing to disclose how much money it got to develop and manufacture its vaccine. They say greater transparency would ensure that the Moderna vaccine is free and widely available around the world.  The Defense Department’s Defense Advanced Research Projects Agency is investigating the claims, according to a letter the agency sent to KEI earlier this year.

In a Nov. 9 letter to NIH Director Francis Collins, Public Citizen said Moderna did not name NIH scientists on three patent applications and urged him to “publicly reclaim the foundational role of the NIH, and use your leverage to champion global vaccine access.”

Two of the three scientists that the NIH wants listed on the Moderna patent, including Graham, were among a group issued a patent in March for a stabilized form of a protein found in coronaviruses that produces a stronger immune response. In an analysis, Public Citizen said the patent “would likely cover” the approach used by Moderna to develop its vaccine.