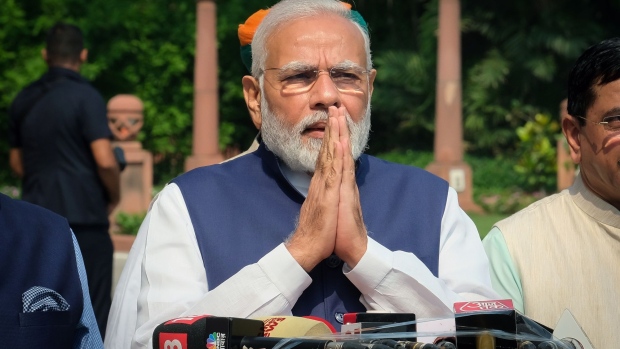 (Bloomberg) -- Prime Minister Narendra Modi’s ruling coalition is likely to win a smaller parliamentary majority in India’s next general election less than two years away, a new survey shows, but he remains by far the most popular choice to lead the country.

Modi’s ruling coalition would win 286 seats in the 543-member of the lower house of parliament if elections are held now. The recent exit of a key coalition partner may cost the ruling alliance some 21 seats from an earlier projection of 307 seats, the survey conducted by India Today magazine in association with polling agency C-Voter found.

The Bharatiya Janata Party-led ruling coalition currently has a comfortable 300-plus presence in the lower house.

The “Mood of the Nation” survey, conducted between February and August reached out to about 122,016 respondents. A large part of the poll was held before Nitish Kumar and his Janata Dal (United) party in the eastern state of Bihar cut ties with Modi’s coalition Tuesday. However, a snap poll a day later reflected the immediate fallout of his exit.

After more than eight years in office, Modi’s personal standing towers over his political rivals even as the South Asian nation grapples with high inflation and unemployment and faced a catastrophic Covid-19 wave last summer. Close to 53% of respondents favored him as the next prime minister, with only 9% backing Congress leader Rahul Gandhi, and 7% in favor of Aam Aadmi Party leader Arvind Kejriwal.