MoneyTalk: Individual or Family RESP... Which is right for you? - BNN Bloomberg
{{ currentBoardShortName }}
Markets
As of: {{timeStamp.date}}
{{timeStamp.time}} 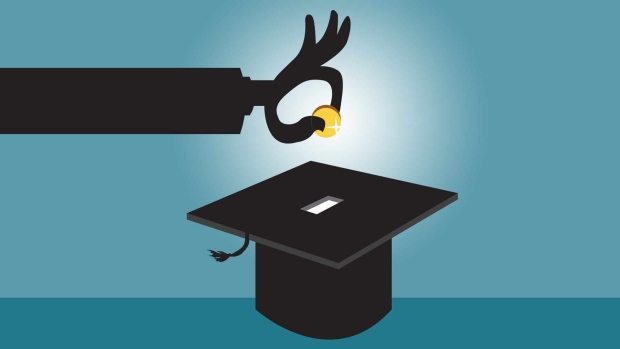 MoneyTalk: Individual or Family RESP... Which is right for you?

With tuition fees climbing higher and higher, RESPs can be a good way to maximize savings for postsecondary education. But, do you know which plan is right for your family?

Even though Riley, 5, and Megan, 8, are in elementary school, they already have big dreams for their future.

“I want to be Superman when I grow up,” says Riley with a sincere smile, “because he can fly.”

Megan is a little more of a realist, but no less adorable.  “I want to be a chemist,” she relays, “so that I can make all sorts of cool potions and stuff.”

Darcy, their dad, knows that any post-secondary course on the history of Krypton or Magic Potions 101 will be expensive. In fact, Riley has already priced it out. When asked how much it will cost to become Superman, he answers expertly, “Forty-hundred and a million dollars.” That’s considerably higher than the projected $102,000 it will cost to get an undergraduate degree in 2027.1

Darcy and his wife Corinne opened up RESPs for both children after they were born, through a popular RESP provider.  But now, they understand that RESPs aren’t necessarily a one-size-fits-all approach. “Right now, Megan and Riley have individual RESPs,” Darcy says from his east Toronto home, “but I’ve been wondering if a family RESP is a better way of doing it.”

An individual RESP is meant for one child. A family RESP is for multiple children to share the savings.

Some Canadians already know that an RESP can be a good way to maximize saving for post-secondary education, namely because the government rewards you for saving by kicking in some money of its own to help.  Last year alone, Canadians held $44-billion worth of assets in RESPs2, and more than half of parents have opened an RESP to save.3 But within the “umbrella” of RESPs are individual plans and family plans, and parents may not know which to choose and why.

While both plans will allow you to save and invest money for post-secondary type of plan has no age restrictions. “An individual plan is great for the one-child family which won’t have to worry about sharing those assets,” says Walker. “It’s also a good option if you would like to open an account for someone who isn’t related to you, and if you want to save for your own future education needs.”

If you have more than one child, a family plan may be the right option as the savings can be shared among all your children. In a family plan, all beneficiaries must be related, by blood or adoption to their sponsor, such as grandchildren, great-grandchildren, brothers or sisters. Beneficiaries can also be added or changed over its lifetime. When allocating the money, each beneficiary must use a portion — although not necessarily equally.  “This means that if you have a child who will be going to medical school,” says Walker, “he or she will be able to utilize more of the assets than another child who will do a college diploma in media studies.”

“One fundamental question is who will go to school first and whose program will be more expensive,” discloses Walker. She advises parents to take a look at how far away school is, how much it will cost when the kids are ready to go, and who is likely to go to a post-secondary institution and who isn’t.

In both plans, the government will grant up to a maximum of $7,200 per beneficiary until they turn 18 years of age. In a family plan, grant money can be shared, but the lifetime maximum of $7,200 per beneficiary must be respected. Any portion of the grant not used by beneficiaries will be returned to the government upon closing the RESP.  And in both cases, RESPs must be terminated after 35 years of existence.

Which plan is right for you?

If you can’t decide which type of RESP to subscribe to, talk to an advisor. Saving for education may be difficult to fit into an already tight budget, but an advisor can also guide you on ways to save for post-secondary costs. The government grant portion of RESPs is “free” money, so making regular contributions may be well worth your time.