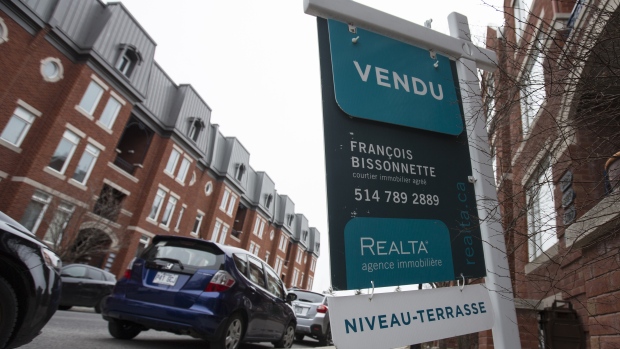 A "Sold" sign stands on display outside a home in the Le Plateau Mont-Royal borough of Montreal, Quebec, Canada, on Saturday, April 14, 2018. , Christinne Muschi/Bloomberg

Montreal's real estate market remained on fire in April with residential home sales increasing 11 per cent from a year ago.

All six areas of the Montreal area increased, led by an 18 per cent increase in the south shore, while the Island of Montreal grew six per cent.

Condominium sales shot up 17 per cent, plexes with two to five units were up 12 per cent and single-family homes grew six per cent.

The Quebec Professional Association of Real Estate Brokers says the median price of single family home increased four per cent to $330,000, condominiums were up six per cent to $260,000 and plexes rose eight per cent to $540,000.