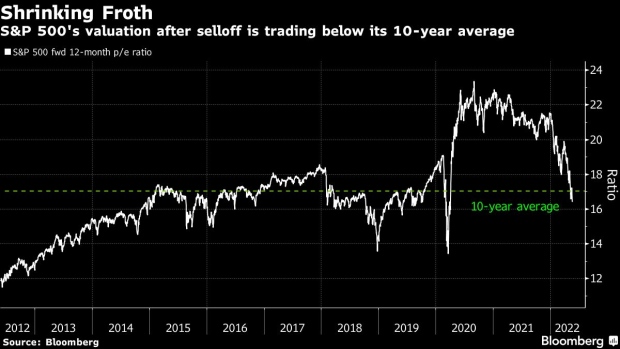 (Bloomberg) -- Even as the S&P 500 on Friday narrowly avoided plunging into a bear market, Morgan Stanley strategists say it’s too early to turn optimistic on stocks.

“Equity clients are bearish, a necessary condition for a sustainable low, but an insufficient one,” strategists led by Michael Wilson wrote in a note on Monday. “Given the risks to growth are just emerging, it’s too early to get bullish.”

US stocks have been roiled in the past two months, with the S&P 500 on Friday posting its longest weekly losing streak since 2001 and flirting with a bear market, on concerns that the Federal Reserve’s tightening will push the economy into a recession. A Bank of America Corp. fund manager survey last week showed recession fears trumped the tail risks from inflation and the war in Ukraine, with investors turning the most underweight on equities in two years.

Morgan Stanley’s Wilson, who continues to be among Wall Street’s most prominent bears and who correctly predicted the latest market selloff, said the biggest areas of risk include the consumers’ ability and willingness to spend, margin pressure, excess inventory and a cyclical downturn for tech spending.

Wilson said 3,400 points for the S&P 500 -- 13% lower from the current level -- more accurately reflects the risks to earnings growth, and expects to see this level by the end of the second-quarter earnings season.

“Until then, vicious bear market rallies should be used to lighten up on the areas most vulnerable to the oncoming earnings reset,” he said.

The strategist retains underweight positioning in cyclical technology and consumer discretionary stocks, and is neutral on internet and software shares.

At the same time, not everyone is as pessimistic. Goldman Sachs Group Inc.’s David J. Kostin expects the S&P 500 to end this year 10% higher thanks to a forecast 8% earnings-per-share growth.