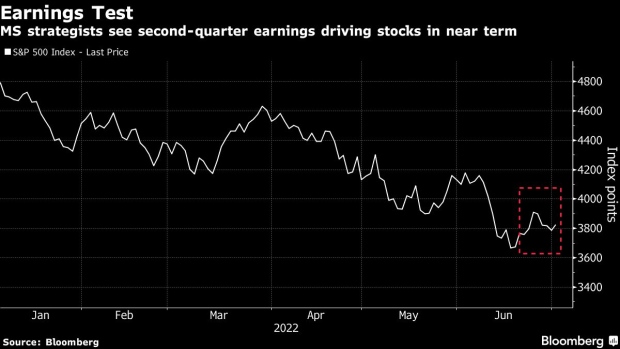 (Bloomberg) -- The US economy is firmly in the middle of a slowdown that’s turning out to be worse than expected amid the war in Ukraine and China’s Covid Zero policy, according to Morgan Stanley strategists.

With a recent dip in bond yields, investors are betting the Federal Reserve may turn less hawkish if inflation peaks in the second half of the year, but “any fall in rates should be interpreted as more of a growth concern rather than as potential relief from the Fed,” strategists led by Michael J. Wilson wrote in a note.

The S&P 500 is emerging from its worst first half in over 50 years as investors worry a toxic combination of a hawkish Fed and surging inflation will fuel an economic contraction. If macroeconomic data don’t confirm a recession, equity markets could rally further, according to Morgan Stanley, but if growth were to indeed contract, the S&P 500 may sink to 3,000 points -- about 22% below its latest close, Wilson said.

Wilson, one of the most vocal bears on Wall Street who correctly predicted this year’s selloff, sees the S&P 500’s fair value target at about 3,400 to 3,500, or as low as 11% below current levels. As interest rates and equity risk premiums start to reflect the growth slowdown more accurately, stocks will likely be driven by second-quarter earnings from here, he said.

With S&P 500 and Nasdaq 100 forward earnings estimates both more than 20% above the post-global financial crisis trend, there are signs that profit expectations will be cut over the next few months, Wilson said.

“Until earnings estimates are cut to more reasonable levels or valuations reflect that risk, the bear market is not complete,” he wrote.

The market is rewarding earnings stability, and defensive industries including telecoms, utilities, insurance, real estate, some parts of consumer staples and health care look favorable when assessed for earnings risk, he said. Tech hardware and semiconductors, on the other hand, are at greater risk, according to Morgan Stanley.