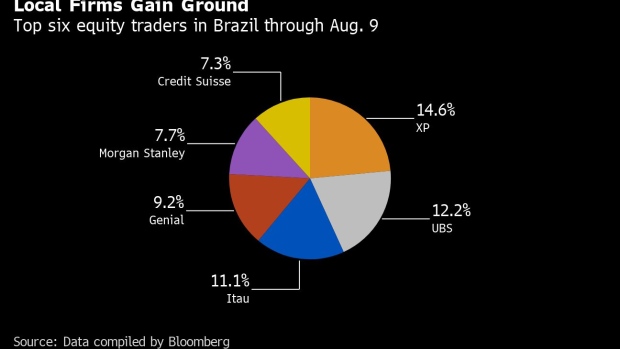 (Bloomberg) -- For the first time in at least a decade, Morgan Stanley’s brokerage failed to reach a top-three ranking in Brazil equity trading, dropping to fifth place as local competitors gained ground by joining forces.

“By acquiring Ideal, we’re not just adding high-frequency trading market share,” Carlos Constantini, head of wealth-management services at Sao Paulo-based Itau, said in an interview. The acquisition also adds “an engine from a super digital-brokerage firm -- one that operates only in the cloud with impeccable execution quality and big scalability potential.”

Itau has been buying up competitors while selling its minority stake in the nation’s biggest brokerage, XP Inc. Ideal, which specializes in high-frequency trading and brokerage services, was founded by Nilson Monteiro, who was head of Brazil equity and electronic trading for Latin America at UBS Group AG before leaving with part of his team in 2019.

“We are most focused on supporting clients’ needs and ensuring long-term profitability,” Mendez said in an interview. “So we plan to keep a lean team and our long-term strategy of focusing on big institutional clients from Brazil or abroad.”

Morgan Stanley, which doesn’t serve individuals in Brazil, is among the biggest providers of total-return swaps, which give international investors the same payoff they would get by owning shares or investing in a local index without having to open a domestic account or deal with other Brazilian investing regulations.

Individual investors have been selling stocks amid rising interest rates in Brazil and the US, and equity funds saw a net withdrawal of over 50 billion reais ($9.9 billion) since the beginning of the year, according to Brazil’s capital-markets association, Anbima. Daily average trading volume in Brazil fell 14% this year through Aug. 8, to 28.8 billion reais, according to B3 SA - Brasil Bolsa Balcao, the nation’s only stock exchange.

“The doubts are all about US interest rates and if it will generate a global recession or not,” he said.

UBS’s market share in Brazil rose to 12.2% from 11.4% a year earlier, leaving the Swiss bank holding on to second place in the rankings with 1.05 trillion reais.

“We saw a very significant inflow of foreign investment in Brazilian equity markets, mainly in the first quarter of the year, as investors moved portfolios away from nations such as Russia and China due to the Ukraine conflict,” Daniel Mendonca de Barros, head of UBS global markets in Latin America, said in an interview. “At the same time, the volume of outflows from local funds was important.”

Holidays in the Northern hemisphere and concerns over interest rates hikes in the U.S. are also helping to depress trading volumes in Brazil, he said.

The Zurich-based bank was already the second-biggest equity trader in Brazil when the company launched a joint venture with state-owned Banco do Brasil SA, Latin America’s second-largest bank by assets, in 2020.

UBS is a top firm for high-frequency trading and is gaining share in total-return swaps. This month, the bank began absorbing part of the flow from Banco do Brasil’s retail clients.

XP remains the top Brazilian equity trader, including its Rico, Clear and Socopa businesses, with 1.25 trillion reais in volume for the period, according to data compiled by Bloomberg.

The firm accounts for about 50% of the flow from individual costumers, said Lucas Rabechini, director of financial products at Sao Paulo-based XP.

“We have institutional clients such as hedge funds and corporate costumers, but our DNA is really more focused in retail,” Rabechini said.

Itau acquired 49.9% of XP’s total capital in 2017, but the central bank didn’t approve part of the deal, including the portion that would have given Itau control of the brokerage at some point. Itau decided to sell the investment and now holds less than 10% of XP’s capital.