Morgan Stanley traders cashed in during the waning months of 2020 to round off the bank’s best year on record.

The division beat analysts’ estimates as fourth-quarter equities revenue surged to cement the bank’s standing as the top stock-trading shop. It joined its closest peers, JPMorgan Chase & Co. and Goldman Sachs Group Inc., in consolidating their standing on the top perch of Wall Street with the pandemic helping secure their lead over smaller rivals.

“The year finished off extremely strong with record results across the board,” Morgan Stanley Chief Financial Officer Jon Pruzan said in an interview Wednesday. He doesn’t a expect a repeat this year. “None of us have a crystal ball -- unlikely we will repeat 2020. We still expect strong numbers relative to 2019.”

Ten years into Chief Executive Officer James Gorman’s tenure atop the firm, it has carried out two of the largest deals by a top Wall Street bank. That’s been accompanied by record earnings and a stock surge which has lifted the firm’s market capitalization to more than US$135 billion -- effectively ending Morgan Stanley’s reputation as Wall Street’s smallest big bank. 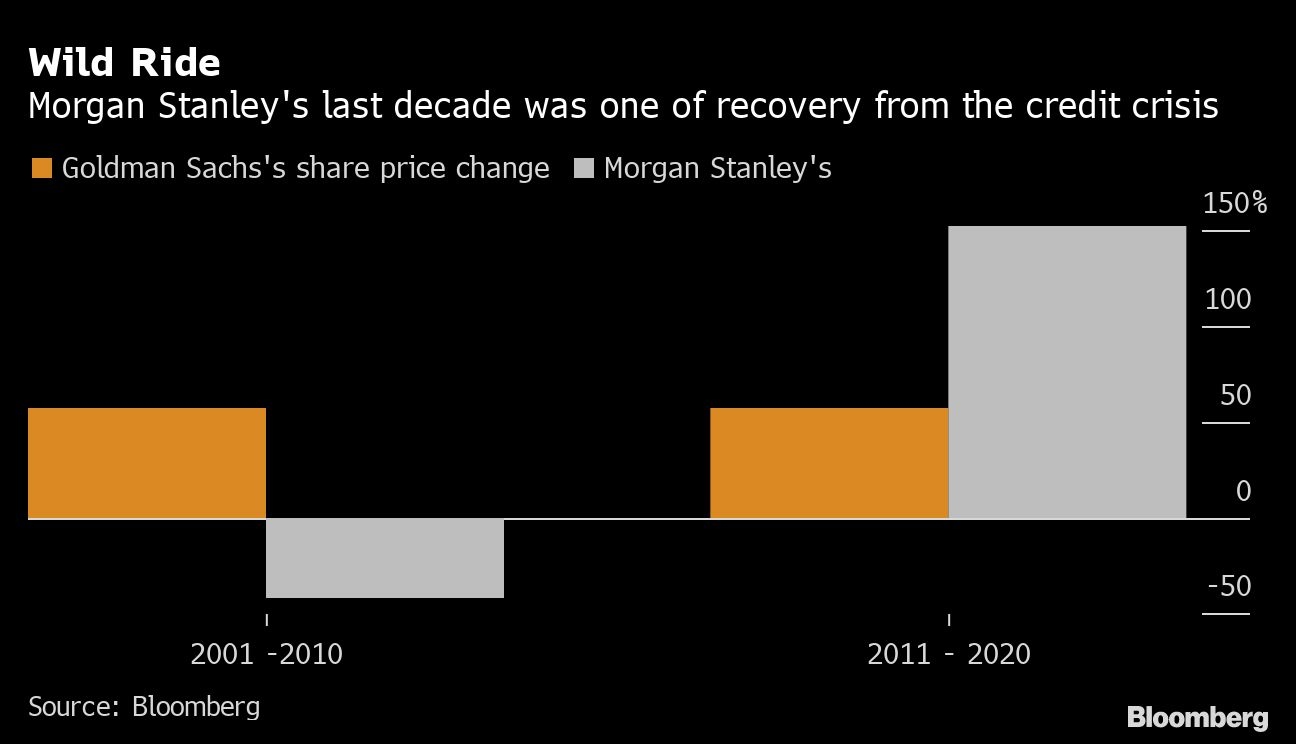 Morgan Stanley weathered a turbulent start to the 2000s, just barely escaped the travails of the financial crisis and emerged in the last decade on a much firmer footing. That roller coaster ride is reflected in shares that underperformed those of chief rival Goldman Sachs for a decade, before they reversed positions for the next 10 years, even as the two firms delivered similar returns in the same timespan.

The wealth- and investment-management businesses at Morgan Stanley have given the firm more certainty than the fickle fortunes found in trading and dealmaking. The strategy has been successful enough for Goldman to try to embrace diversification too.

Equities revenue for the quarter at Wall Street’s stock-trading leader climbed 30 per cent to US$2.5 billion, according to a statement. Analysts had expected US$2.15 billion.

Morgan Stanley’s fixed-income, currencies and commodities trading revenue jumped 31 per cent to US$1.66 billion, more than the US$1.51 billion analysts had estimated. Many of the big U.S. banks struggled last quarter to produce FICC results that matched rosy analyst forecasts. The surges helped the bank deliver record full-year net revenue of US$48.2 billion, up 16 per cent from 2019.

“Since we’ve restructured this business five years ago, we’ve been broadening and deepening our footprint and picked up share again this quarter,” Pruzan said of the FICC unit.

The firm’s investment bankers posted revenue of US$2.3 billion, more than the US$1.64 billion forecast, as equity underwriting more than doubled from a year earlier. The SPAC mania that’s overtaken Wall Street -- the use of special purpose acquisition companies to take firms public -- and the rebound in corporate matchmaking, helped lift Wall Street bottom lines.

Wealth-management revenue increased 24 per cent to US$5.68 billion. The firm leans on managing money for affluent individuals and other clients for more than half its revenue every quarter, a business being boosted by the takeovers of Eaton Vance Corp. and E*Trade Financial Corp. The firm’s investment-management unit contributed US$1.1 billion of revenue, with assets under management totaling US$781 billion.