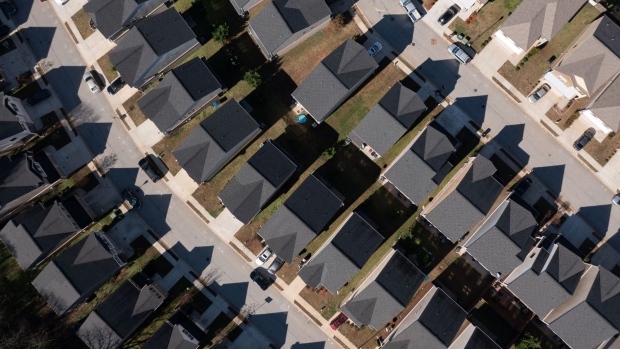 Homes in a subdivision in McDonough, Georgia. , Bloomberg

(Bloomberg) -- US mortgage rates slipped slightly, the first decrease since late April, as the housing market adjusts to a central bank working to stifle the hottest inflation in more than four decades.

The average for a 30-year loan dropped to 5.25% from 5.3% last week, Freddie Mac said in a statement Thursday. Even with this week’s drop, mortgage rates have climbed rapidly from 3.11% at the end of last year.

The Federal Reserve is moving to quickly address inflation by raising rates. That’s pushing up mortgage costs and starting to pressure the housing market. A new Redfin report said that 61% of home offers faced bidding wars in April, down from 67% during the same period of 2021. US new-home construction slipped in April as the industry faces challenges from supply and labor shortages.

“Economic uncertainty is causing mortgage rate volatility,” Sam Khater, Freddie Mac’s chief economist, said in the statement. “As a result, purchase demand is waning, and homebuilder sentiment has dropped to the lowest level in nearly two years. Builders are also dealing with rising costs, meaning this posture is likely to continue.”