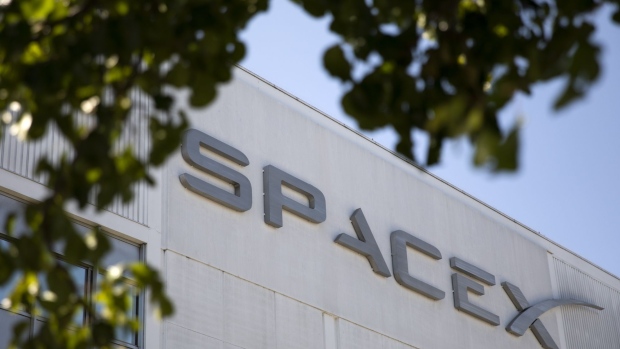 (Bloomberg) -- Elon Musk’s Space Exploration Technologies Corp. is expected once again to vie against a joint venture of defense giants Boeing Co. and Lockheed Martin Corp. for shares of at least 39 U.S. military and intelligence satellite launches in fiscal years 2025 through 2027.

Other competitors may also emerge for the third phase of the national security space launch program, which is laid out in new Air Force budget projections. Northrop Grumman Corp. and Jeff Bezos’s Blue Origin LLC bid unsuccessfully in the previous phase so they may try again.

Musk forced his way into the lucrative defense launch business after campaigning vigorously in Congress and the courts, where he denounced the Boeing-Lockheed joint venture, United Launch Alliance, as a monopoly of the two biggest U.S. defense contractors. After settling a lawsuit against the Air Force in 2015, closely held SpaceX was certified to compete for launches.

SpaceX’s missions this year included carrying two national security payloads developed by the National Reconnaissance Office, which is in charge of spy satellites.

To an extent, SpaceX may now be the established leader because the Boeing-Lockheed team is offering its new Vulcan family of rockets, which haven’t yet flown.

The White House has proposed giving the Air Force the biggest percentage increase among the military services in its fiscal 2023 budget, largely to develop new space-based systems such as a “Resilient Missile Warning and Tracking” program intended to spot the maneuvering of Chinese hypersonic weapons. The Space Force’s research and development budget alone would grow to $15.8 billion, up from $11.3 billion requested for this year. The launch program will send these developing systems into space.

The Phase 3 acquisition strategy is currently being crafted to determine “the contract type, period of performance and total number of launches under development,” Captain James Fisher, a Space Force spokesman, said in a statement. It will be a full and open competition “so it may include additional competitors beyond the current Phase 2 providers,” he said.