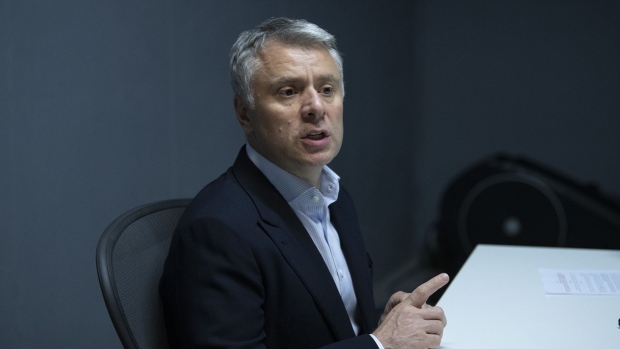 Yuriy Vitrenko, chief executive officer of NJSC Naftogaz Ukrainy, in Kyiv, Ukraine, on Thursday, July 14, 2022. Ukraine’s state-owned energy firm Naftogaz was surprised by a government order to save cash for gas purchases and to ask the holders of roughly $1.4 billion of its bonds to delay debt payments, he said. , Bloomberg

(Bloomberg) -- Ukraine’s state-owned energy company said it’s on track to default on its foreign bonds after the government issued a decree last week compelling it to pursue a debt moratorium that creditors have so far rejected.

A grace period for NJSC Naftogaz Ukrainy to redeem $335 million of international bonds is due to expire on Tuesday. Without the consent of bondholders for a moratorium, or permission from the government for Naftogaz to make the payment, the missed transfer could trigger a cross default event on at least $1.4 billion of its foreign notes.

“It is acknowledged that certain Events of Default have or will occur as a result of the Resolution and the resulting failure to pay,” the company said in a statement, referring to the Kyiv government’s decree on Friday.

Naftogaz said earlier that it had always planned to continue servicing its foreign debts, despite Russia’s ongoing invasion.

According to Naftogaz CEO Yuriy Vitrenko, those efforts were derailed earlier this month after the government suddenly demanded that the company stockpile 19 billion cubic meters of natural gas ahead of the winter heating season, and pushed it to negotiate a two-year bond payment delay.

Such a freeze would free up $546.6 million for the company, according to Bloomberg calculations.

The government itself is seeking a two-year pause on its own foreign bond payments. While foreigners are inclined to grant the sovereign relief, holders of Naftogaz’s bonds say its balance sheet is sufficiently robust to let it pay and argue that the request for a delay has come too late to hold proper talks.

Naftogaz has nowhere left to turn. On Friday, the cabinet decreed that the energy company would need government approval for any transaction with shareholders. As the grace period ticked down, the company’s first request for permission to make the payments was rejected. A second request was ignored.

Even with the deadline approaching, Naftogaz said it is working on a new restructuring proposal.