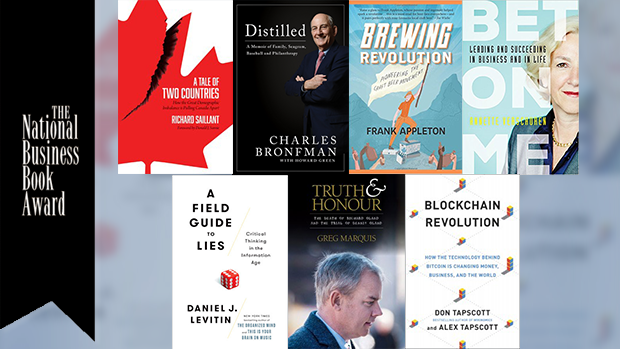 The nominees for the annual National Business Book Award have been announced.

The deciding jury for the award, which includes a number of Canadian journalists and business leaders, will select the top book based originality, relevance, excellence of writing, thoroughness of research and depth of analysis.

Here’s the list of the books that were nominated for 2016:

In this book, Appleton looks back at the brewing business over the last 50 years starting from his involvement in creating Canada’s first cottage brewery, to today’s craft-beer industry.

In Distilled, Bronfman reflects on his family and work life and landing the Montreal Expos, Canada’s first baseball franchise.

A Field Guide to Lies by Daniel J. Levitin

This book explores the topic of “fake news” and the use of misinformation. It looks at how we distinguish between facts and falsities.

Truth and Honour by Greg Marquis

A Tale of Two Countries by Richard Saillant

In his book, Saillant looks at Canada’s economic future by examining the country’s aging population, and the different population profiles between provinces.

Bet On Me by Annette Verschuren with Eleanor Beaton

Verschuren, who is a co-founder of Michaels in Canada and past president of Home Depot in Canada and Asia, provides her philosophy for what it takes to lead and succeed in today’s economy.

BNN will be featuring the nominees throughout the month of April leading up to the award ceremony.