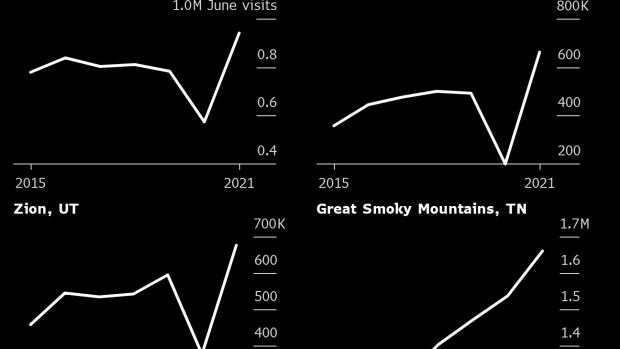 (Bloomberg) -- A post-pandemic boom in national park tourism has left lawmakers wondering how to preserve nature and the visitor experience amid increased traffic, crowds, and waiting times.

“Yosemite is one of the most spectacular places in the world, but I can guarantee the people in that traffic jam weren’t enjoying it,” said Maine’s Independent Senator, Angus King, while presenting a photo of a mountain road backup on Wednesday to the Senate Energy and Natural Resources subcommittee on National Parks.

National park tourism has grown steadily for decades, particularly accelerating in the 2010s. After a brief pandemic lull, visitors have returned to seek fresh air, smashing monthly attendance records at parks such as Yellowstone and Zion. In June alone, over 31 million people visited a National Park Service site.

“The growth in visitation is posing one of the greatest challenges NPS has ever faced,” she said.

Most of the severe congestion occurs at just a handful of the best-known parks, Montana’s Republican Senator Steve Daines observed. Encouraging visits to some of the other 423 sites overseen by the National Park Service could ease crowding at marquee destinations, he said.

Systemwide staffing shortages, however, leave the small parks ill-equipped to pick up that excess demand, said NPCA’s Brengel. During the high-growth years of 2011 to 2019, the NPS lost 16% of its staff capacity, she said.

Some parks have turned to ticketed entry reservations to equalize demand throughout the day. This system has improved the situation at Glacier National Park in Montana, though it has frustrated those without tickets, said Kevin Gartland, executive director of the Chamber of Commerce for Whitefish, a tourist hub near the park.

Read more: The Best Friend of U.S. National Parks Is ... a Car Company?

To alleviate parking and traffic bottlenecks, such parks as Acadia in Maine have restricted private vehicles, providing shuttle service in certain areas. “Often, we talk about too many people—but actually, we’re talking about too many cars,” said King.

National Parks could expand this transit service if they were allocated money via the infrastructure or surface transportation bills that are currently being negotiated in Congress, Brengel told the senators. “This is where we need your help.”

Jenn Tyler, a teacher from Pennsylvania, has been taking National Park vacations with her family since the early 2000s. She tells Bloomberg that the parks she visited recently were more crowded than she’s ever seen.

On a June trip to Great Smoky Mountains National Park in Tennessee, it took hours in dense traffic to drive a 10-mile loop around the park, she says. To access trailheads, cars had to pull over on roads more than  a mile from parking lots. In 2014 and 2016, the same trails were easily accessible.

“It was so bad that we’re like, OK, we don’t want to go to Gatlinburg anymore. We’re done,” Tyler says.

She visited Acadia National Park this month, where—even with the park’s personal vehicle limits—roads and vista points were incredibly congested, she says.

“We’ve been doing this a long time,” Tyler says. “It’s never been this crowded. I’ve never seen this many people interested in going to national parks.”