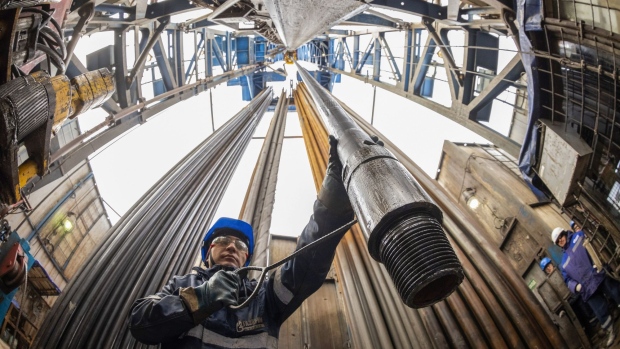 A worker guides drilling pipes at a gas drilling rig on the Gazprom PJSC Chayandinskoye oil, gas and condensate field, a resource base for the Power of Siberia gas pipeline, in the Lensk district of the Sakha Republic, Russia, on Wednesday, Oct. 13, 2021. European natural gas futures declined after Russia signaled that it may offer additional volumes soon. Photographer: Andrey Rudakov/Bloomberg , Bloomberg

Natural gas futures plummeted 11 per cent in the U.S. as forecasts shifted warmer through the middle of next month, allaying concern about tight domestic supplies amid a global shortage of the heating fuel.

The expiration of the December contract last week amplified the market’s volatility. Prices closed 7.5 per cent higher on Friday as traders rushed to close out bearish positions before the contract rolled off the board. Contracts for January delivery fell 62.3 cents to settle at US$4.854 per million British thermal units in New York on Monday.

Since late summer, volatility in gas prices has stayed well above the average for the past decade even after a drop from last month’s peak as traders try to gauge whether winter cold will strain inventories.

Late-autumn cold in Europe and Asia has sparked fears that global gas shortages will worsen as nations struggle to refill stockpiles. But so far, there’s little sign of a similar situation developing in the U.S., even as shale producers keep a lid on output and the country’s exports of liquefied natural gas surge to a record. U.S. gas stockpiles are only 1.6 per cent below normal for the time of year.

The so-called widowmaker spread between March and April futures, essentially a bet on how tight inventories will be at the end of the northern hemisphere’s winter, shrank to 41.5 cents, the narrowest since June, after widening to US$1.909 last month. 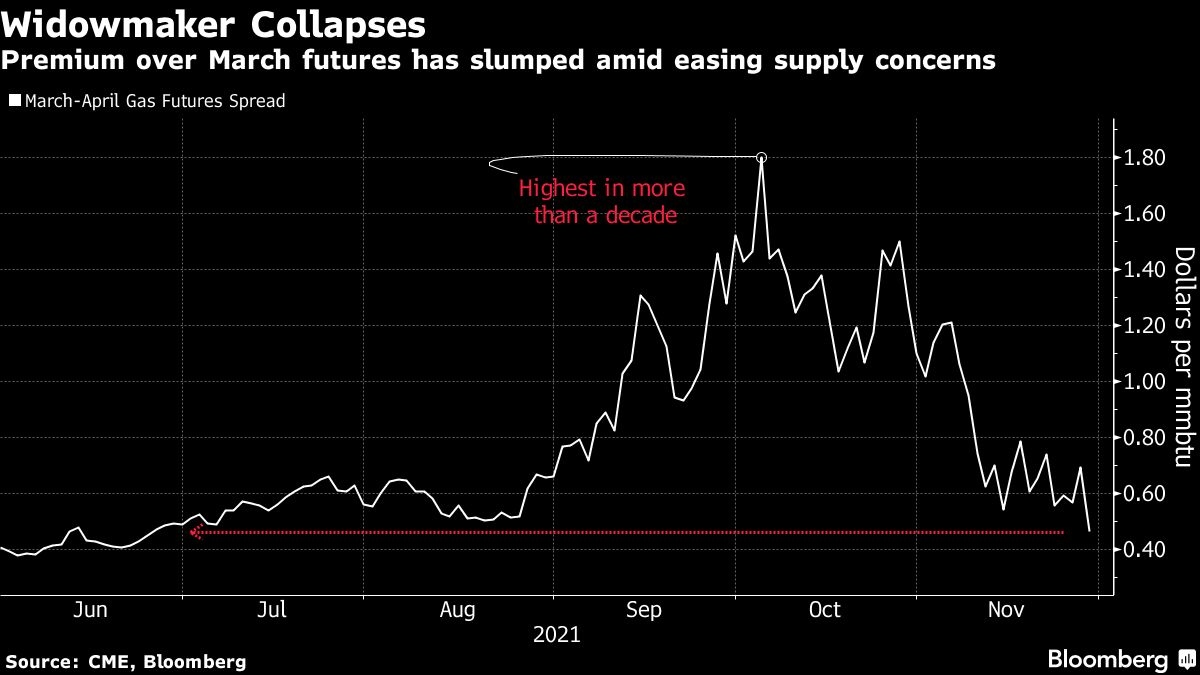 Much of the U.S. should see milder-than-usual weather this week, with temperatures expected to peak in the 50s Fahrenheit in Minneapolis and Chicago, according to the Weather Channel. The western half of the country should continue to see above-normal temperatures at least through Dec. 13, private forecaster Commodity Weather Group said in a note to clients.

“The downward pressure should remain,” said John Kilduff, founding partner at hedge fund Again Capital in New York. December start is looking like a “bust in terms of gas demand,” while storage levels have improved this fall, he added. “We’re decently supplied now.”