We see a drop in oil and natural gas inventory around the world, not only in the U.S.: Fund manager

Natural gas prices surged to a fresh seven-year high in the U.S. as the expiration of October options added momentum to a rally fueled by escalating concerns about tight winter supplies.

Gas for October delivery gained 11 per cent, the biggest daily jump since February, settling at US$5.706 per million British thermal units, a level not seen since early 2014. Traders were closing out bearish positions ahead of the expiration of October options and futures this week. Shares of gas producers also soared amid broader energy-market gains, with EQT Corp. up as much as 12 per cent and Southwestern Energy Co. climbing 24 per cent.

Prices for the heating and power-generation fuel are soaring globally with low stockpiles in Europe and Asia sparking fears of shortages as winter approaches. In the U.S., storm-related supply disruptions have compounded concerns about slow output growth as drillers heed investors’ calls for financial restraint, making it unlikely that shale producers will be able to bail out the rest of the world this winter.

“The commodity is getting repriced in terms of its value,” said John Kilduff, founding partner at Again Capital. “There’s such a demand for it around the world.”

The premium for gas delivered in March versus April -- essentially a bet on how tight supplies of the fuel will be at end of winter -- has climbed to the highest for this time of year since 2005. U.S. gas stockpiles are 6.9 per cent below the average for the past five years, government data show, and the nation is poised to send more cargoes of the fuel overseas as new export capacity comes online. 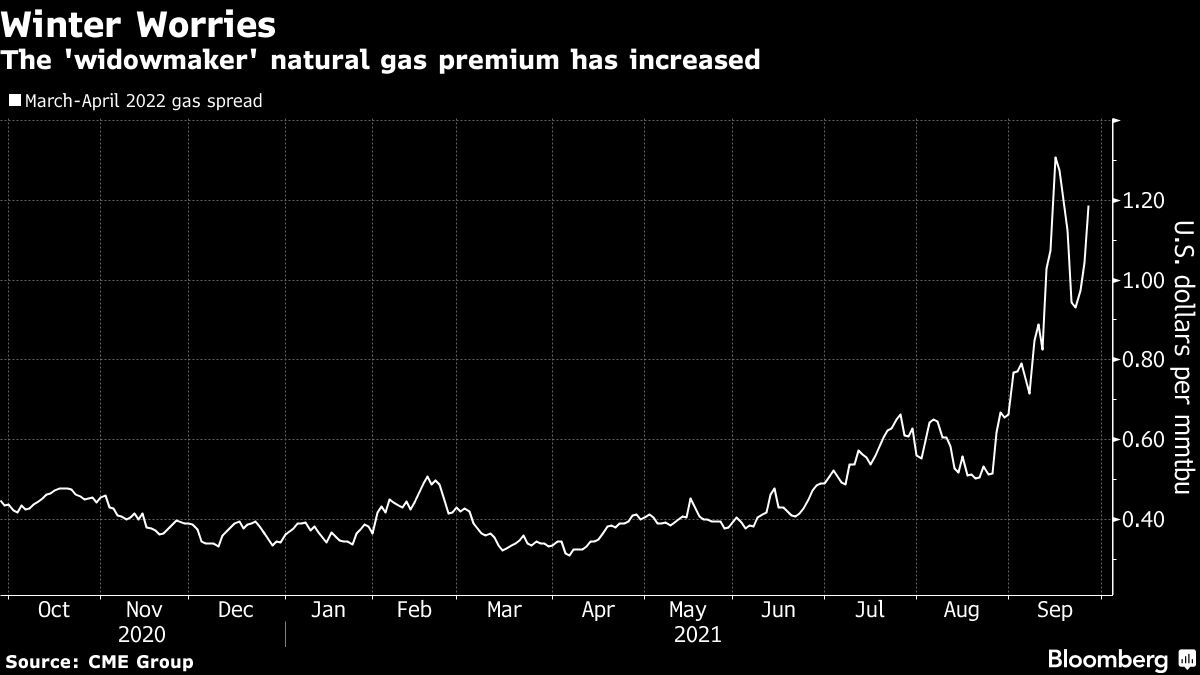 About 24 per cent of gas production in the U.S. Gulf of Mexico is still shut after Hurricane Ida landed, according to the Bureau of Safety and Environmental Enforcement. Operations in the region are not expected to fully recover until next year.

With no major production increases seen for the next several months and export plants running close to full capacity on strong Europe and Asia demand, “the perception of a shortage can easily be a reality if we see a cold December,” says Dennis Kissler, a senior vice president at Bok Financial Securities. Still, the market may be poised for a “large correction” if U.S. temperatures move into seasonal norms, he adds.

Meanwhile, gas traders are paying increasingly more for options contracts to protect against a potential price surge this winter. Implied volatility -- a measure of how expensive options are -- has jumped to a record 107 per cent on February contracts, up from 68 per cent a month ago, according to exchange data compiled by Bloomberg.