Investors should have a buy the dip mindset when it comes to commodities: Scott Bauer

One morning in early June, a fire broke out at an obscure facility in Texas that takes natural gas from US shale basins, chills it into a liquid and ships it overseas. It was extinguished in 40 minutes or so. No one was injured.

It sounds like a story for the local press, at most — except that more than three weeks later, financial and political shockwaves are still reverberating across Europe, Asia and beyond.

That’s because natural gas is the hottest commodity in the world right now. It’s a key driver of global inflation, posting price jumps that are extreme even by the standards of today’s turbulent markets — some 700 per cent in Europe since the start of last year, pushing the continent to the brink of recession. It’s at the heart of a dawning era of confrontation between the great powers, one so intense that in capitals across the West, plans to fight climate change are getting relegated to the back-burner.

In short, natural gas now rivals oil as the fuel that shapes geopolitics. And there isn’t enough of it to go around.

It’s the war in Ukraine that catalyzed the gas crisis to a new level, by taking out a crucial chunk of supply. Russia is cutting back on pipeline deliveries to Europe — which says it wants to stop buying from Moscow anyway, if not quite yet. The scramble to fill that gap is turning into a worldwide stampede, as countries race to secure scarce cargoes of liquefied natural gas ahead of the northern-hemisphere winter.

Germany says gas shortfalls could trigger a Lehman Brothers-like collapse, as Europe’s economic powerhouse faces the unprecedented prospect of businesses and consumers running out of power. The main Nord Stream pipeline that carries Russian gas to Germany is due to shut down on July 11 for ten days of maintenance, and there’s growing fear that Moscow may not reopen it. Group of Seven leaders are seeking ways to curb Russia’s gas earnings, which help finance the invasion of Ukraine — and backing new LNG investments. And poorer countries that built energy systems around cheap gas are now struggling to afford it.

“This is the 1970s for natural gas,” says Kevin Book, managing director at ClearView Energy Partners LLC, a Washington-based research firm. “The world is now thinking about gas as it once thought about oil, and the essential role that gas plays in modern economies and the need for secure and diverse supply have become very visible.” 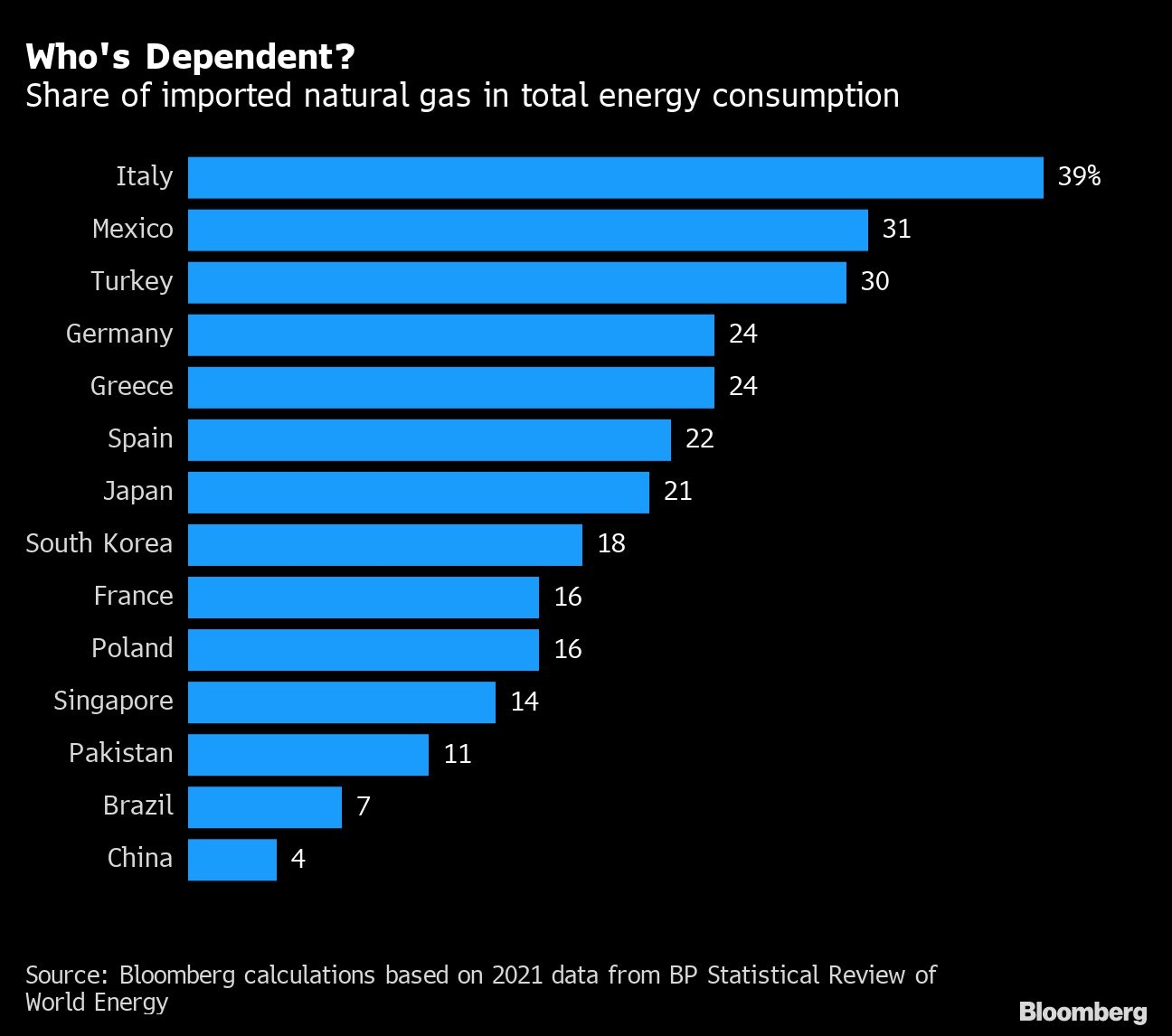 Natural gas used to be a sleepy commodity that changed hands in fragmented regional markets. Now, even though globalization appears to be in retreat across much of the world economy, the gas trade is headed in the opposite direction. It’s globalizing fast — but maybe not fast enough.

Many countries have turned to natural gas as part of a transition to cleaner energy, as they seek to phase out use of dirtier fossil fuels like coal and in some cases nuclear power too. Major producers — like the US, which has quickly risen up the ranks of LNG exporters to rival Qatar as the world’s biggest — are seeing surging demand for their output. Forty-four countries imported LNG last year, almost twice as many as a decade ago. But the fuel is much harder to shift around the planet than oil, because it has to be liquefied at places like the Freeport plant in Texas.

And that’s why a minor explosion at a facility seen as nothing special by industry insiders — it’s not the biggest or most sophisticated of the seven terminals that send LNG from American shores – had such an outsized impact.

Gas prices in Europe and Asia surged more than 60 per cent in the weeks since Freeport was forced to temporarily shut down, a period that’s also seen further supply cuts by Russia. In the US, by contrast, prices for the fuel plunged almost 40 per cent — because the outage means more of the gas will remain available for domestic use. 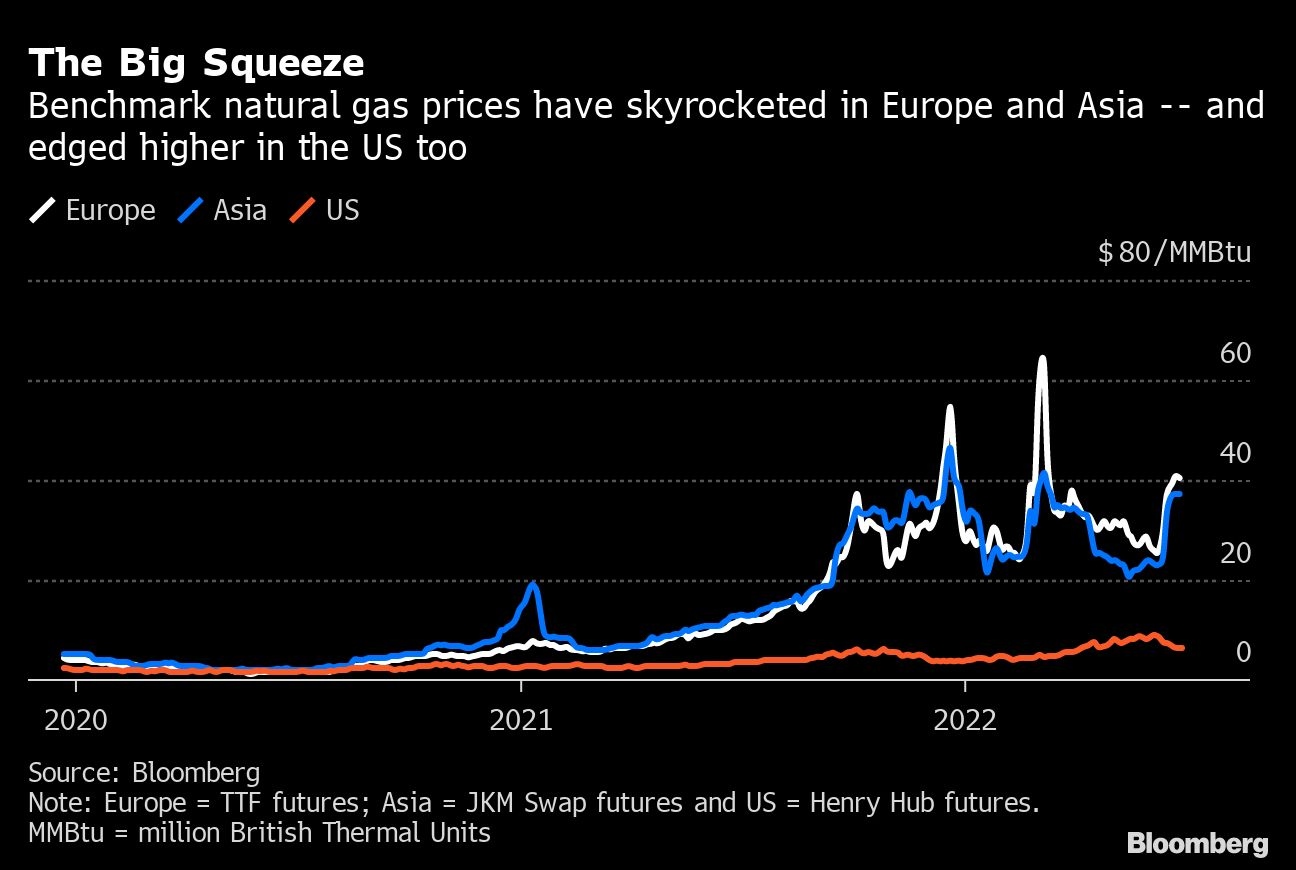 There were already plenty of signs of extreme tightness in the market. War and COVID may be roiling every commodity from wheat to aluminum and zinc, but little compares to the stomach-churning volatility of global gas prices. In Asia, the fuel is now about three times as expensive as a year ago. In Europe, it’s one of the main reasons why inflation just hit a fresh record.

Natural gas remains cheaper in the US — but even there, futures had more than doubled this year before the Freeport shutdown.  With key political allies from Germany to Ukraine desperate to buy American gas, US manufacturers warn that more sales abroad will mean higher costs at home. The market reaction to the Freeport fire illustrates a “clear connection between LNG exports and the inflationary impacts to domestic prices for natural gas and electricity,” says Paul Cicio, president of the Industrial Energy Consumers of America.

To meet all the new demand will require a massive wave of investment in supply. That’s already under way, and it got a boost at last week’s meeting of the Western world’s biggest economies, where G-7 leaders vowed to back public investments in gas projects — saying they’re “necessary in response to the current crisis.”

Among the urgent infrastructure needs:

Export facilities:  The rush for LNG is accelerating projects in North America and beyond. Last month, Cheniere Energy Inc. greenlighted a terminal expansion in Texas. In April, a Canadian LNG project backed by Indonesian tycoon Sukanto Tanoto got the go-ahead to begin construction. In Qatar, Exxon Mobil Corp. and Shell Plc are among energy giants with stakes in a US$29 billion project to boost LNG exports.

“You have global gas prices so high that they incentivize the signing of new long-term contracts,” says Samantha Dart, head of natural gas research at Goldman Sachs. “We are seeing those announcements coming left and right, with a lot of US proposed liquefaction facilities.”

Import terminals:  In Europe, plans for about 20 terminals have been announced or sped up since the Ukraine war began. Germany, which has no LNG terminals, has allocated about US$3 billion to charter four floating ones and connect them to the country’s network. The first one is supposed to go online around the end of this year. Emphasizing the need for speed, Vice-Chancellor Robert Habeck pointed out that Tesla Inc. managed to build a factory near Berlin in just two years, and said it’s time to cut through German red tape. “First, dig the trench where the pipe is to go in,” he said. “Then, the permit comes.”

China, the world’s top LNG buyer last year, is in the midst of one of the largest buildouts the industry has ever witnessed. Ten new import terminals are slated to come online in 2023 alone, and capacity will roughly double in the five years through 2025, according to BloombergNEF.

Pipelines: Even with more capacity to receive shipments of LNG and turn it back into gas form — a process known as regasification — Europe lacks infrastructure to move it where it might be needed. Spain, for example, has Europe’s biggest regasification facilities — but it only has two pipeline connections to France via the Pyrenees, capable of carrying little more than one-tenth of those volumes, according to Bloomberg Intelligence.

Tankers: Shipyards in South Korea, where most of the world’s LNG tankers are built, are seeing a surge in orders that’s leaving them short of skilled labor. They’ve been forced to look outside the country to places like Thailand for welders, electricians and painters, raising their quotas for migrant workers. cited growing risks of an “imminent German recession on the back of energy rationing,” and pointed to soaring power prices in Italy and France too. Morgan Stanley predicted the whole euro area will be in a downturn by year-end.

In some cases all of this means a U-turn away from policies aimed at combating climate change -– especially in Europe. Government-backed lenders like the European Investment Bank and the European Bank for Reconstruction and Development, which had been focused on financing renewable energy, have signaled a shift and said they’re now more willing to back gas projects.

But Europe’s breakneck efforts won’t be enough, according to Bloomberg Intelligence, which calculates that LNG imports could meet 40 per cent of the region’s gas needs by 2026 — double last year’s figure, but still far short of the volumes that Russia has been supplying.

That’s why warnings of a gas-driven slump in Europe’s economies are escalating.

Last week, Germany’s government said it’s in talks to bail out utility Uniper SE, which is losing some 30 million euros (US$31 million) a day because it has to cover the missing Russian gas at soaring spot-market prices. Companies like chemicals giant BASF SE say they may have to cut output. Deutsche Bank cited growing risks of an “imminent German recession on the back of energy rationing,” and pointed to soaring power prices in Italy and France too. Morgan Stanley predicted the whole euro area will be in a downturn by year-end. 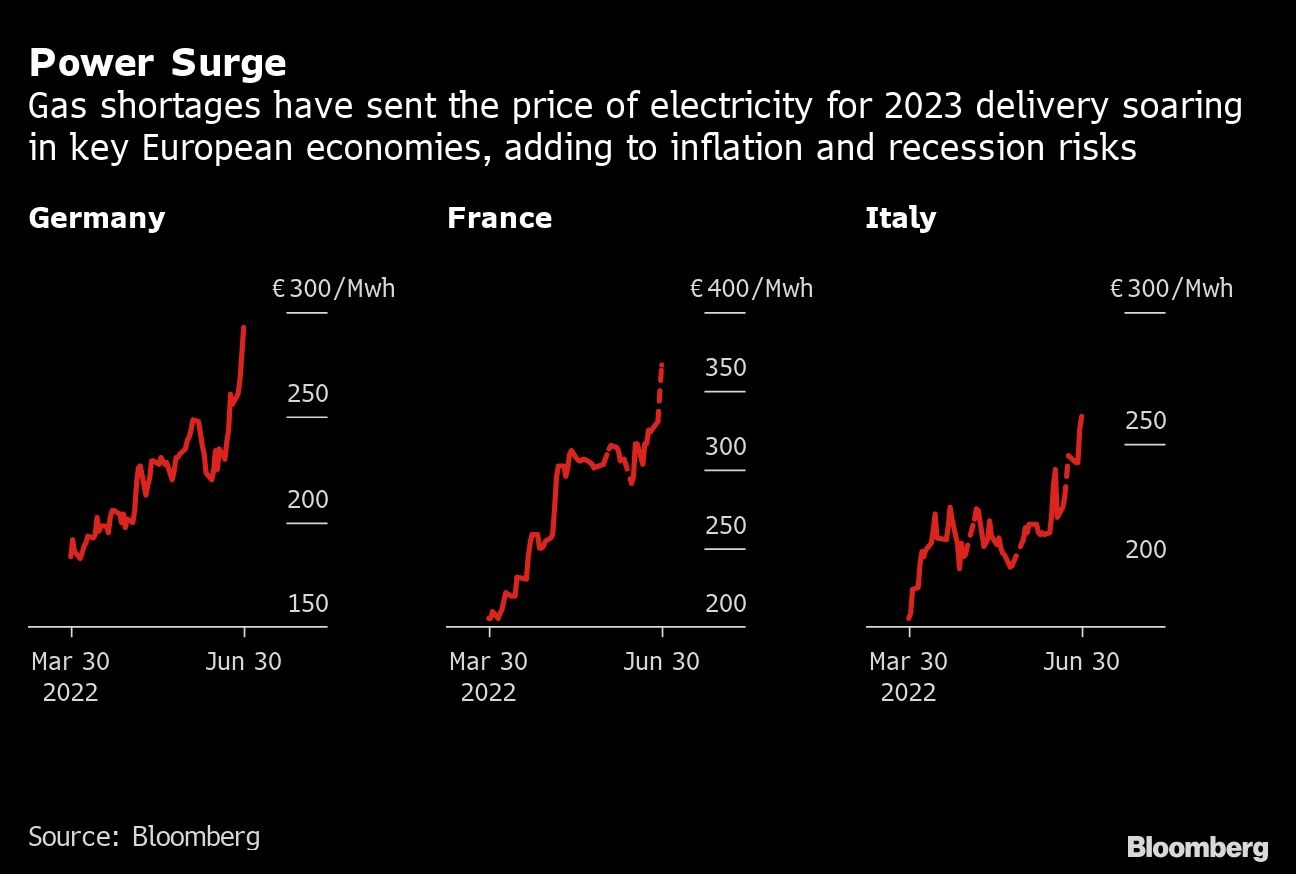 For some emerging economies — which increasingly have to compete with rich countries like Germany in bidding for LNG cargoes, as gas goes global — the consequences have already been disastrous.

In Pakistan, which built its energy system on cheap LNG, planned blackouts are plunging regions into darkness during the sweltering summer months. Shopping malls and factories in major cities have been ordered to shut early, and government officials are working shorter hours.

Thailand is curbing LNG imports due to surging prices, potentially putting the country at risk of fuel shortages. Myanmar, which is grappling with political instability, stopped all LNG purchases late last year when prices started to rally. India and China have also cut back imports.

“Where once natural gas markets were largely regionally siloed, we now have a globalized spot market that has connected the world’s exposure to the fuel that has become critical to many economies,” said James Whistler, Singapore-based managing director at Vanir Global Markets, an energy and environmental brokerage. “This has never been more evident than in the past few months.”